Sadly, a few kids were out the day in kindergarten they talked about respecting other people’s property. 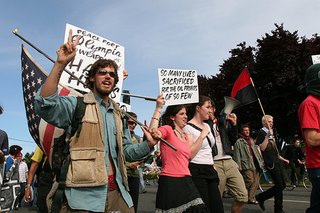 Protesters marching through the streets of downtown Olympia. (Do these kids even think before they write their ridiculous signs?)

Via Daily Kos, an Indymedia writer shared her horror of the police response to the “non-violent” acts:

“I was there tonight, I saw people getting sprayed, and I was truly shocked. It was such a violent response to a nonviolent act. I saw a very gentle-spirited woman I know get sprayed. I saw a man in a wheelchair get sprayed. All they were doing was banging on the fence. In fact, I think the woman I know was just standing near the fence when the spraying happened. I didn’t hear any warning, although I admit I was keeping my distance and might not have heard it. If there was a warning, it should have been louder…”

Here’s a picture of that nonviolent act… 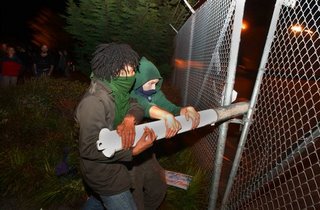 Protesters (nonviolently) use a metal bollard in an attempt to break open the Port of Olympia fence Monday night during a military shipment protest. (Toni L. Bailey/The Olympian)

And, there are more pictures of the protesters “nonviolence” Here.

Here the young protesters attempt to “nonviolently” topple the fence. 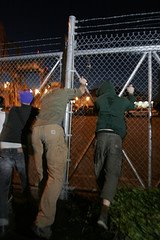 Pushing down fences may be fun to some but against the law to the policemen on the other side of that fence. 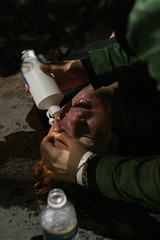 And, with choices there are consequences.
Pepper spray victim being treated. 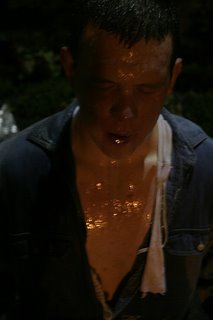 Pepper spray victim trying to cope with the effects.

I applaud these citizens, who stand up to the war machine, no matter the futility. They are courageous and inspiring.