This Associated Press headline from this Tuesday morning June 27, 2006, is enough to make you spit out your coffee: 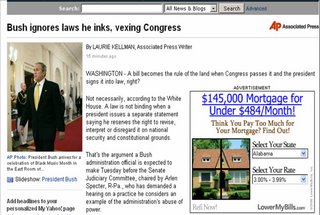 Just when you thought the media could not be any more biased you wake up to a “Bush the dictator” headline!

That’s right, America. We live under a dictatorship now where El Presidente Bush ignores all laws, even the ones he personally signs, and does what ever he damn well pleases… Why did we not see this coming? This is not Hugo’s Venezuela. This is not Chavista. This is far worse! This is America under George W. Bush!

A bill becomes the rule of the land when Congress passes it and the president signs it into law, right?

Not necessarily, according to the White House. A law is not binding when a president issues a separate statement saying he reserves the right to revise, interpret or disregard it on national security and constitutional grounds.

That’s the argument a Bush administration official is expected to make Tuesday before the Senate Judiciary Committee, chaired by Arlen Specter, R-Pa., who has demanded a hearing on a practice he considers an example of the administration’s abuse of power.

“It’s a challenge to the plain language of the Constitution,” Specter said in an interview with The Associated Press. “I’m interested to hear from the administration just what research they’ve done to lead them to the conclusion that they can cherry-pick…”

Instead, he has issued hundreds of signing statements invoking his right to interpret or ignore laws on everything from whistleblower protections to how Congress oversees the Patriot Act.

“It means that the administration does not feel bound to enforce many new laws which Congress has passed,” said David Golove, a New York University law professor who specializes in executive power issues. “This raises profound rule of law concerns. Do we have a functioning code of federal laws?”

Stop the madness! Hopefully the good Senator Specter can stop this dictatorship in its tracks before this tyrant Bush takes absolute rule. Thank Goodness there are still good publishers like the New York Times that will take on this tyrant!

It looks like the Associated Press has joined the Shadow Government Coalition along with the New York Times.

Texas Rainmaker explains this poor attempt at reporting the news.