After, Cindy Sheehan took her antiwar, anti-Bush spiel to the Festival of Resistance Picnic at Lions Sugar Bowl Park in support of American military deserters in Canada this past weekend, she was off meeting European elites in Austria capped off with an antiwar parade against George Bush and Tony Blair in Vienna, today. 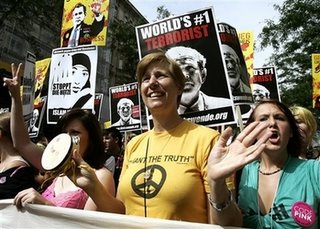 Today Cindy Sheehan led the parade of peaceniks in Austria, a country with no troops fighting in Iraq, and continued her antiwar democratic message about a war for Halliburton and Exxon profits:

All of their families, American and Iraqi, will never be the same again due to the trickery and deceit of the commander in chief of the U.S. military and his advisers and cabinet members.

So Halliburton can get reconstruction contracts and Exxon Mobil can lay its pipelines and charge $3.50 for a gallon of gas?

Someone please explain this argument… If Halliburton, Exxon, and others were not laying their pipelines in Iraq, wouldn’t that make oil prices even higher?

And, although Exxon was subpoenaed during the UN Oil for Food investigation, how much of their profit is coming from this oil war nation today? 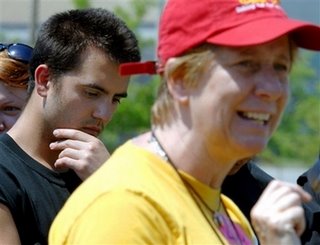 Darrell Anderson, 24, left, listens to ‘peace mom’ Cindy Sheehan speak during a rally in Fort Erie, Ontario, Saturday, June 17, 2006. Anderson of Lexington, Ky., who arrived in Canada by way of Niagara Falls in January 2005, spent seven months in Iraq with the Army’s 1st Armored Division and received a purple heart following a roadside bomb attack before deciding during a leave he would not go back. Sheehan was making her second visit to Canada in support of sanctuary for those fleeing the U.S. military. The Canadian government has so far denied political asylum to U.S. soldiers who have sought it. Appeals are pending. (AP Photo/Don Heupel)

Texas Truth has more on Cindy’s rally for the deserters.