Another day, another arrested Islamic militant. 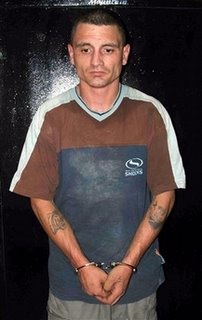 Florin Lesch, 30, who Romanian authorities said had converted to Islam, stands handcuffed in Timisoara Romania, Tuesday June 27 2006 after being detained for allegedly planned to detonate a car in a public place in the western city of Timisoara, to protest Romania’s alliance with the United States in Iraq and Afghanistan, authorities said Tuesday. Police from the organized crime unit blocked his car late Monday about 30 kilometers (20 miles) east of Timisoara while he was driving toward the city. He tried unsuccessfully to escape. (AP Photo / Dragos Bota)

Romania currently has over 800 troops in Iraq.