This is just sick… 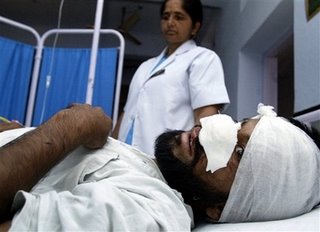 Roshan Din whose nose, ear and tongue were severed by militants at Neoch village, receives treatment at a hospital in Jammu, India, Friday, June 16, 2006. Suspected Islamic militants killed one man, slitting his throat, and slashed off the noses, ears and tongues of two other men in an apparent revenge attack suspecting the villagers betrayed one of their comrades who were killed in April, in Indian Kashmir on Thursday, police said. (AP Photo/Channi Anand)

Radical Islamists attacked and killed one man and cut the tongues and noses off four other villagers in a remote village in Kashmir:

“These foreign militants are ruthless,” he said, referring to guerrillas India say are Islamists who cross into its part of Kashmir from Pakistan, and sometimes even Afghanistan.

Villagers in the area said the attackers were probably acting out of revenge, suspecting the locals of informing the police about the presence of a militant who was killed in the area in April.

Elsewhere in the region, a civilian was killed and five others, including three policemen, were wounded on Friday when suspected militants fired at a police patrol near a mosque in Bandipur town, north of Srinagar.