Friends at Operation Undergarment sent me this information on a donations drive they are sponsoring for this young courageous American hero they have been helping from Texas–
(This will remain the top posting this weekend. Scroll down for updates)

24 year old Christian lost his legs in the War in Iraq.
Here is his heroic story in his own words…

In June of 2004 my reserve unit was called to active duty to fight the war on terror in Iraq. Like many other men my age I was excited to be involved in something bigger, something exciting. I’ll admit that as we crossed the burm into Iraq from Kuwait I was terrified. In the weeks and months to come, feelings of fear soon shifted as we overcame insurgent attacks and adjusted to the fast paced lifestyle of being in a combat zone. Air assault missions became the new excitement for the platoon as we joined with Special Forces units in the area to root out the local insurgency. Village raids would be conducted in the shadows of the night, routinely called “snatch and grabs”.

It didn’t take long before I felt invincible. Although I didn’t let on, my attitude began to change drastically as we were mandated to attend all funerals or “ramp ceremonies” within the brigade. It seemed like we lost a man everyday for a while. It started hitting home when our company lost one of our own, Sgt. John Ogburn. There’s something about death that has the ability to strike fear into each of us, and when it does, it’s hard to ignore.

The explosion ripped through the floor of my M1114 up-armored HMVEE with a blast so fierce that it tore my permanent retainer from my teeth, and popped one earplug out. Silence seemed to linger for minutes before Mendez called out my name. I could reply only with uncontrollable screams and moans that conveyed the pain I was feeling. My eyes were stinging from the dirt and debris spit up off the desert floor, and my mouth was littered with the overwhelming sweet taste of explosives and blood. Fear set in as I noticed my blood-soaked uniform. My entire left arm was warm and red, and the toe of my left boot was turned completely around and pointed at me. My right leg was buried under debris within the cab of the vehicle. I realized that moving my legs was pointless, they would not respond to my desire to
pull them free. My whole world seemed to shatter as I thought about my death.

Here I am: broken, tired, and weak. How could I leave my new wife so soon? What have I done to her? My mind raced as I lay, my lungs and vocal chords strained, yet unwilling to cease their desperate cry. I began to pray. Outloud I frantically begged Jesus to forgive me of my sins one last time, to take away the unbearable pain that consumed my being. Over and over I cried out, hoping to be set free from my body….. I’m getting tired. The thought of falling asleep captivates me, everything else slipping away. Only the slaps of the men close to me bring me back to reality. It was obvious that I am hurt bad, really bad. I was almost starting to believe our medic – “everything is ok, it’s not that big of a deal” until someone from another unit came up and blurted out “Holy Shit!”

From that moment I knew my guys were lying to me. It seemed like an eternity before the choppers came. Ninety minutes with no morphine has that effect. I begged for some kind of pain relief when I was settled into the helicopter. The crew did honor my request, but didn’t do much for the immense pain. Dust was flying everywhere as we landed in Balad. It took only seconds for medical soldiers and airmen to get me from the helicopter to the rolling hospital bed. A team of six or more people surrounded me as we rolled down to the operating room; poking, prodding, asking seemingly complex questions that I could not answer. I lay feeling helpless as I watched the lights pass by, just like the movies. My last request was that someone tie my wedding ring around my wrist. I fell asleep almost instantly. 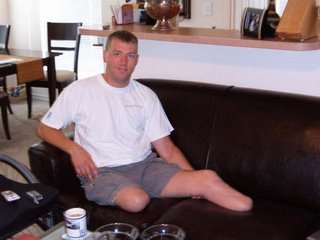 “Christian!…Christian!…Christian!” I could hear my name, but was extremely disoriented as someone pulled the tube from my throat. I tried opening my eyes but could see only a blur of light. “Hey guy, your legs have been amputated to save your life. You’re in Germany and should be on your way home when we can get you on a flight.” I burst into tears and seemed to cry for several long minutes. My mind raced as I thought of my wife. I had so many fears, so many questions, many of which could only be answered by me, and with time.

It’s been just over a year now since my injury. I walk, I run, I laugh daily. In every day I find purpose, peace, and love. Every day brings new challenges and new struggles and is a reality that my life is forever changed. Even though my life has changed dramatically, I can honestly say it’s not bad, just different. Someone once told me that life is 10% what happens to you and 90% how you react to it. I believe that to this day.

I have proudly served this country for seven years, and would gladly do it again. Becoming a soldier has been a true honor. To stand and fight with so many great Americans is a gift that I will never forget. Although some may be growing weary of the war on terror, I ask you to remember those who have fallen, those who have served, and those who have sacrificed so much for our great country. Do not let their sacrifice be in vain, stay the course.

Let’s finish the job together…as a free people…as Americans! I am an American soldier and I love my country. God bless you all.

** Operation Undergarment in helping Christian who is having financial challenges at this time with a donations drive, you are able to donate (by PayPal) to help Christian out at Operation Christian Hope.