Michelle Malkin is having a photoshop contest this weekend against the national security leakers at the New York Times. You have to check it out:

Here is my entry… 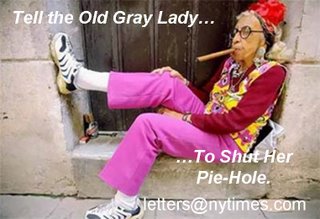 I’m continuing the theme from the other day.

And, it looks like Prairie Pundit is correct with his assumptions regarding the democratic tactics on reducing troops. They were going to be reduced anyway. The New York Times leaked the planned troop reductions earlier today from a secret meeting.

Hugh Hewitt has this letter from Milblogger T. F. Boggs:

What ceases to amaze me about your paper is the
lengths you are willing to go to make headlines and
sell papers. Who cares if those headlines help the
enemies of America, you guys are making money and that
is what it is all about in the end right?

Your recent decision to publish information about a
classified program intended to track the banking
transactions of possible terrorists is not only
detrimental to America but also to its fighting men
and women overseas. I know because I am a sergeant in
the army on my second tour to Iraq. As I am sure you
don’t know because you aren’t in Iraq, and I am sure
never will be, terrorism happens here everyday because
there are rich men out there willing to support the
everyday terrorist who plants bombs and shoots
soldiers just to make a living. Without money
terrorism in Iraq would die because there would no
longer be supplies for IED’s, no mortars or RPG’s, and
no motivation for people to abandon regular work in
hopes of striking it rich after killing a soldier.

Throughout your article you mention that “the banking
program is a closely held secret” but the cat is out
of the bag now isn’t it. Terrorists the world over can
now change their practices because of your article.
For some reason I think that last sentence will bring
you guys pleasure. You have done something great in
your own eyes-you think you have hurt the current
administration while at the same time encouraging
“freedom fighters” resisting the imperialism of the
United States. However, I foresee a backlash coming
your way. I wish I had a subscription to your paper so
I could cancel it as soon as possible. But alas, that
would prove a little tough right now since I am in
Iraq dealing with terrorists financed by the very men
you are helping.

Thank you for continually contributing to the deaths
of my fellow soldiers. You guys definitely provide a
valuable service with your paper. Why without you how
would terrorists stay one step ahead of us? I would
love to hear a response as to why you deemed revealing
this program a necessity, but that will probably come
as soon as the government decides to finally put you
guys behind bars where you belong.

Shame on the Old Gray Lady!

Here is part of Neo Neocons great piece on the New York Times:

I submit the following answer to the Anchoress’s question: The Times is trying to relive its glory days. Don’t forget that, as I described in this post, a lawsuit by the Nixon White House against the NY Times to stop the publication of Ellsberg’s Pentagon Papers in 1971 was a seminal step in determining the freedom of the press to publish national security secrets. Although the security breaches involved in the publication of the Pentagon Papers were smaller than those involved today, the precedent is there. The Times was victorious, and the case set the stage for the publication of today’s security leaks.

Democracy Project explains that “Transparency Is Needed To Control Leaks.”