A typical front page from an American Wednesday morning newspaper. 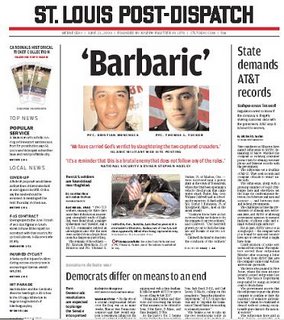 Where is President George W. Bush?

But, what are President George W. Bush and his advisors thinking?

We know that Bush certainly will have his hands full with Iranian nuke talk and Cindy Sheehan and orange clad Gitmo protesters.

On Tuesday, June 20, 2006 the world reports included this horrible news from Basra, Iraq:

A suicide bomber killed a woman and wounded five people when he attacked a crowd of elderly and disabled pensioners in the southern Iraqi city of Basra on Tuesday, police said.

The crowd were gathering to receive their monthly pension.

Police said only one of the two explosive belts the bomber was wearing detonated. Witnesses saw three bomb disposal experts at the scene. Police said they were trying to defuse the second bomb on the attacker’s corpse.

Then there was this shocking news of children and women used as human shields in Afghanistan:

TALEBAN fighters used women and children as human shields as they tried to escape into the mountains of Afghanistan, British troops claimed yesterday.

The tactics were revealed in the first account by those who fought in one of the main battles faced by the men of 3 Para and the Royal Gurkha Rifles in Helmand province, where 3,300 British troops are stationed.

The Taleban’s use of human shields happened during a six-hour battle that began when British troops arrived in a remote area to flush out a suspected Taleban hideout.

And finally, not since US soldiers were dragged through the streets of Mogadishu, has America witnessed the horrible slaughter of brave, young, American soldiers in such gruesome fashion as what was described on Tuesday in reports from Iraq.

And, as Americans learned more and more about the brave young men and their barbaric demise, the story grew more savage and shocking throughout the day.

America is feeling raw, enraged, confused, saddened and unsettled by this inhumanity.

So, where is President George W. Bush? Where is the comforting or determined speech that you would expect from a leader at this time?

It doesn’t have to be an 30 minute address with an aircraft carrier in the backdrop, but how about using this “coincidental” information from Tuesday to define to the Free World and America what we are up against?

The terrorists pushed the moral argument back on the side of freedom, yesterday, despite what the Europeans say.

It doesn’t have to be a Gettysburg Address, President Bush, but help yourself and remind America why we are fighting today…
Say something!

In related news, Tony Blair committed today that Great Britain would stay the course in Iraq.

And, Japan denied that they would be pulling out of Iraq despite the misleading media headlines from yesterday.

And, Bush is not the only one silent on these atrocities. The human rights groups that like to raise a stink about women’s underwear on heads are strangely silent today. But, the ACLU did put out a statement yesterday against the Bush Administration.

Update: Michelle Malkin has much more on this noticeable silence today.