Update: Bush condemns the reported leak by the New York Times! (more below) 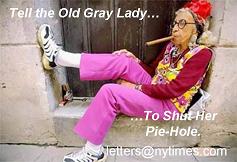 I realize that the Times’ circulation is falling at an alarming rate, but it hasn’t yet reached such a pass that its stories are only noticed when Rush Limbaugh mentions them.

A deeper error is Keller’s characterization of freedom of the press as an institutional privilege, an error that is a manifestation of the hubris that has marked the NYT of late. Keller writes: “It’s an unusual and powerful thing, this freedom that our founders gave to the press… The power that has been given us is not something to be taken lightly.”

Powerline has a very powerful letter from a Lt. Tom Cotton serving in Iraq who does not appreciate that the Times just made it easier for the enemy to purchase IED’s for killing Americans!

Michelle Malkin has a roundup and points to Patterico and Andy McCarthy at NRO.
Hugh Hewitt has a lengthy critique of Keller’s words.
Ace – “Bill Keller offers up a gassy melange of generalities and bromides to justify his treason.”
Mark in Mexico has a nice roundup.
Michael Barone – “Why do they (the NYT) hate us?”
The Anchoress also has a good roundup.
Four Right Wing Wackos– “Oh Please! Oh Please!”
Gina Cobb -More reckless disregard for our safety.

Update: Bush blasts the the leakers at a press conference today,
VIDEO HERE

After meeting with troop supporters (Republicans), President Bush condemned the national security leaks by the Times today in a press conference from the Roosevelt Room:

“For people to leak that program and for a newspaper to publish it does great harm to the United States of America,” Bush said, jabbing his finger for emphasis. He said the disclosure of the program “makes it harder to win this war on terror.”

The program has been going on since shortly after the Sept. 11, 2001, terror attacks. It was disclosed last week by the New York Times, the Wall Street Journal and the Los Angeles Times.

Using broad government subpoenas, the program allows U.S. counterterrorism analysts to obtain financial information from a vast database maintained by a company based in Belgium. It routes about 11 million financial transactions daily among 7,800 banks and other financial institutions in 200 countries.

“Congress was briefed and what we did was fully authorized under the law,” Bush said, talking with reporters in the Roosevelt Room after meeting with groups that support U.S. troops in Iraq.