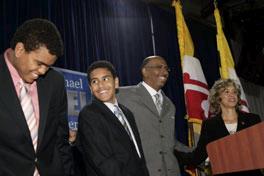 Republicans have African-American candidates on three statewide tickets this year, more than ever before for statewide offices for either party. The Steele Family is pictured above.

The Washington Post dug up some television ad from 18 years ago to attack black Republican Michael Steele yesterday:

The fundraiser thrown for Maryland Lt. Gov. Michael S. Steele on Thursday night, while ordinary in most ways, struck some African American leaders as notable because of the host.

Unlike the dozens of high-dollar events across the country in his U.S. Senate bid, this event was thrown by the producer of the famous “Willie Horton” ad, the 1988 commercial that came to symbolize the cynical use of skin color as a political wedge.

“Why would he go for money to those who have done us harm?” asked Elbridge James, a former leader of the NAACP’s Montgomery County branch.

Nor, Steele said, was there anything incongruous about donations he took from others who have offended black audiences in the past, including Republican Sens. Trent Lott (Miss.) and Conrad Burns (Mont.) as well as Alex Castellanos, the man behind the racially charged “White Hands” ad that then-Sen. Jesse Helms (R-N.C.) used to attack his black challenger.

What a lame attack! Obviously, the democrats do not want this Senate election to be about the issues!

Steele was on Hannity and Colmes last night. Here is his response to Alan Colmes about the latest democratic attacks:

“I don’t see democrats having any problems accepting cash from Robert Byrd despite his past with the Ku Klux Klan.”

Colmes goes into meltdown… shrieks at Steele for mentioning something… (Byrd the Ku Klux Klan Kleagle)… that happened years ago!

End of segment- Round goes to Steele.

You can contribute to Michael Steele’s campaign HERE if you would like. It is going to be a rough 4 months ahead for the Senate hopeful if these racist attacks continue… and they will.

Dan Riehl has more on the 20 year old attack ads.