Leaders of Hamas agreed Tuesday to establish a new national-unity government in the coming weeks as part of an accord signed by the largest Palestinian political factions that implicitly recognizes Israel’s right to exist, according to Palestinian officials involved in the talks.

The agreement signals a major shift by the political leaders of Hamas, who for the first time have effectively endorsed a two-state solution to the Israeli-Palestinian conflict. It comes at a time when Hamas leaders are confronting internal divisions, international economic sanctions and the threat of an Israeli ground assault.

The AP, BBC, and AFP made similar statements this morning and even released photos with this amazing news. 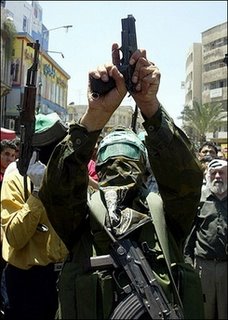 A member of the armed wing of Hamas, the Ezzedine Al-Qassam Brigades, shows off his weapon during a rally in support of the ruling Hamas party in the West Bank city of Nablus. Governing Palestinian movement Hamas executed a historic policy shift in agreeing to an initiative that implicitly recognizes archfoe Israel’s right to exist.(AFP/Jaafar Ashtiyeh) 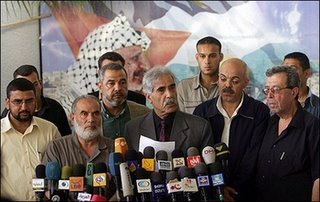 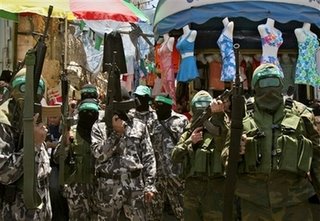 Masked Hamas militants demonstrate in support of the Hamas-led government, in the West Bank city of Nablus, Tuesday, June 27, 2006. The rival Hamas and Fatah movements on Tuesday completed an agreement over a plan that implicitly recognizes Israel, ending weeks of acrimonious negotiations, a top official said. But the deal is overshadowed by the crisis over the kidnapping of an Israeli soldier. (AP Photo/Nasser Ishtayeh)

But, sadly as Charles Johnson noted soon after this morning’s headlines… “Hamas tells the truth but mainstream media refuse to listen,” the news turned out to be bogus. Hamas later released this statement:

Rival Palestinian political factions Fatah and Hamas have reached agreement on a common political strategy to try to end a damaging power struggle.
However, Hamas negotiators have denied earlier reports that the deal meant the militants would implicitly recognise Israel – a major policy shift.

Strange… Hamas appears to be acting like an irrational terrorist group.