A study released this week as reported in Popular Mechanics, surprisingly showed no evidence of exploding bombs being the cause of the levee breaks in New Orleans following Hurricane Katrina (Via Glenn Reynolds):

Government or contractor negligence was not discovered. The practices and design criteria did vary however since 1965. The piecemeal construction of levees, floodwalls and gates over the decades led to “inconsistent levels of protection.” Protection erected around the 17th Street Canal for example was not as strong as those at the Orleans Canal, which incorporated more conservative designs and practices. Materials also ranged in strength and fortitude.

IPET also determined Katrina’s surge levels were as much as six feet higher than design levels in the eastern and southern portions. And the waves were “long period ocean storm waves” allowing them to run over the levees. Some waves generated velocities of 10 to 15 feet-per-second over levees.

All but four breaches were due to overtopping and erosion. A key element leading to failures at the 17th Street Canal and London Avenue was the formation of gaps behind I-walls. The morning of the hurricane, water had already risen 1.7 feet above the tops of the levees and floodwalls to an elevation of 14.2 feet. As the water passed over the levees, it eroded the soil supporting the walls degrading their stability and resulting in catastrophic flooding.

If that was not bad enough, Freedom Fighter Hirsi Ali has been in states for less than a month and already she is making life hell for Louis as Stop the ACLU reports: 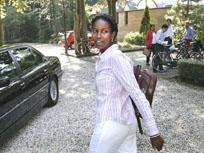 Hirsi Ali says the debate gave her hope – she received one letter from a Muslim that read, “I don’t know what you started in me, but I am thinking… . “

In the same way, Hirsi Ali explains, she’d like to challenge the beliefs of Black Muslims in America. She finds it as unfathomable that African Americans would convert to Islam as that Jews would convert to Nazism.

“I want to tell them about Darfur,” she asserts firmly. “The people in Darfur are being exterminated just because they are black. So [Islam] is also a racist doctrine… . People don’t know what’s going on in Saudi Arabia. All these palaces are full of black slaves! So the black community here converting to Islam is like converting voluntarily to slavery.

“I think if they hear it from a black person,” she says hopefully, “it will help.”

The Saudis don’t seem to have a very good track record with the Indonesian help, either.