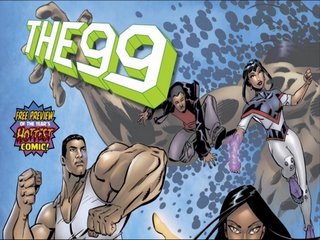 The Kuwaiti cartoonist recieved an award at a Brazilian comic book convention last week for his work:

A Kuwaiti cartoonist has won a prestigious award for his creation of the world’s first superhero team based exclusively on Islamic culture.
At the Cartoons and Comics Festival in Recife last week, Brazil, Dr. Naif Al-Mutawa was presented with an award in recognition of his creation of the comic book: ‘The 99’.

The concept is based on the 99 attributes of God in Islam, and the Middle East is represented by Noora the Light, from the UAE, and Jabbar the Powerful, from Saudi Arabia.

Al-Mutawa said “This is a concept whose time has come and one that will forever change the way our children view such things as multiculturalism, cooperation and our own cultural heritage.”

You’ll have to check it out and see what you think, if you’re a comic book aficionado.