For the second time in one week, Karl Rove has the liberal bloggers screeching mad.

First it was announced that Rove would not be indicted.
We saw how the Left took that… 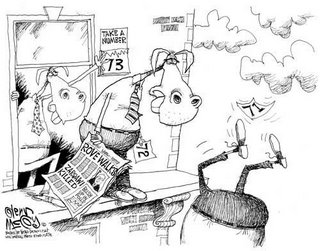 I do also think that the internet has proven to be a more powerful tool on our side than it has been for the other side. It has proven to be a tool on our side to sort of unite Conservatives and have a healthy intra-movement dialogue. But it’s essentially been something that has helped us gain in influence and broaden our appeal. Among Democrats, my sense is that the blog world has tended to strengthen the far Left of the Democratic Party at the expense of liberal, but somewhat less liberal, members of their party. It has tended to sort of drive their party even further to the Left rather than focusing on good ideas that would help unite people around common goals and common purposes. Instead, the Internet for the Left of the Democratic Party has served as a way to mobilize hate and anger — hate and anger, first and foremost, at this President and conservatives, but then also at people within their own party whom they consider to be less than completely loyal to this very narrow, very out-of-the-mainstream, very far Left-wing ideology that they tend to represent.

As Front Page reports, the Left did not take this kneeling down in an orange jumpsuit. They went ballistic! Here’s one comment:

“F**k you Karl Rove,” was (how a reader at) Raw Story.com began a studied response. “We are angry and we hate you and your boss as well as the rest of the f***ed up media and crony s*#t we all see all the time in addition to what has become of a once great country going down the tubes!!!!”

That was one commenter at Raw Story. Is there really any question as to the how the political discourse in this country took a slide in the manure? What’s sad is that this behavior has now gone mainstream, thanks to the Left.

Lori Byrd has much more at Wizbang.