Israeli troops and tanks roll into Gaza, BBC now has video of the raid, HERE.

Israel took out two bridges and knocked out power in most of Gaza as they moved into the Palestinian territory tonight:

Israeli planes attacked two bridges and a power station, knocking out electricity in most of the Gaza Strip early Wednesday and stepping up the pressure on Palestinian militants holding captive a 19-year-old Israeli soldier. As tanks were seen moving along the Israeli side of the border fence with Gaza, Palestinians dug in behind mounds of dirt, preparing for a possible Israeli offensive.

Despite calls by Wretchard to “give peace a chance,” Israeli troops pushed inside the borders of Gaza tonight. 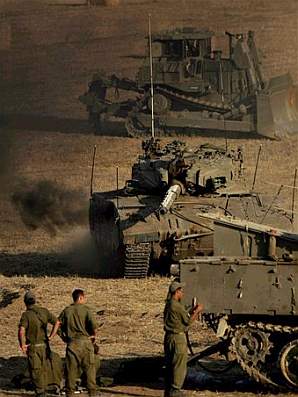 IDF tanks amass around the Gaza Strip, poised for an incursion in response to the kidnapping of IDF soldier Cpl. Gilad Shalit. (Photo: AP)

Vital Perspective is following the news.
OpFor has news of Israeli helicopter gunships firing on Gaza.
Shrinkwrapped has thoughts on this dance of escalation and reaction.
Israel Rules is starting a blog prayer chain for the captured Israeli soldier, Gilad.

Also today, the Palestinians say that they have kidnapped another Jewish youth:

Arab sources in the PA said last night, and again today, that they had kidnapped another Israeli. Eliyahu Asheri, 18, of Itamar, has not been seen since he left Beitar Illit on Sunday.

Eliyahu, son of Miriam and Yitro Asheri, is a student at the pre-military yeshiva academy in N’vei Tzuf, in the western Binyamin area. He was last seen Sunday when he left a friend’s home in Beitar Illit on his way north. He was to have joined his yeshiva colleagues on a trip to the Golan Heights, but the head of the academy called this morning to say that Eliyahu never arrived.

The Palestinians are now threatening to kill the kidnapped Jewish settler. 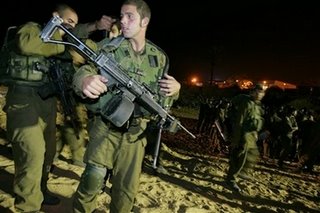 Israeli soldiers prepare after receiving orders to move into the Gaza Strip at an army base outside Kibbutz Kerem Shalom, near the border with the southern Gaza Strip, early Wednesday June 28, 2006. (AP)

No Pasaran! has news on the kidnapped Jewish soldier.

HotAir links to a YNET story claiming Syria has sent in troops to protect the Hamas leader!