The Israeli Flag made a surprise appearance on the soccer field at the World Cup in Germany. 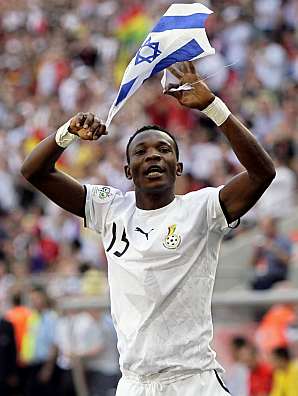 Ghana’s John Pantsil who plays professionally for Hapoel Tel Aviv, keeps his pre-World-Cup promise, waving an Israeli flag after his team’s second goal against the Czech Republic. (AP)
More at The Jerusalem Post

Powerline says that FIFA may have a problem with Pantsil’s political display.

A Jew-hating liberal attacks the gesture.

In India the clerics are concerned about this soccer phenomenon.

Pajamas Media has a roundup of reaction.

Atlas reports on the terrible question of Israel’s survival.