Here’s a reality check for those sourpusses out there.

Michael Barone pointed out two weeks ago that we are living in the best of times. Today he reports that George Bush Knows His History.

Barone notes we are seeing record worldwide economic growth and we are at a low point in armed conflict in the world. Barone also believes that we were lucky we had Harry Truman 50 years ago, and today we are lucky to have a president who takes bold action and braves vitriolic criticism to defend our civilization against those who would destroy it.

Michael Barone is right on. The Left may want to think again before they start comparing the War in Iraq with the War in Vietnam, or any other US war.

The reality is, there is no comparison! Comparing fatality figures for American Wars relative to the size of the US population you see that the Iraq War is like no other! 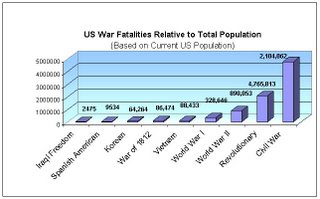 This was posted earlier by anonymous and I thought it was worth repeating for those who are stuck in their own mental quagmire:

In other words, while every American life is precious, if you what to know the true impact of war casualties as percentage of population–you need to do the following:

The simple fact of the matter is that the anti-war movement, many who, if you look at their histories, had no problems with the Soviets in Afghanistan, or the Marxist Sandinistas–both who waged much bloodier wars that what we are currently seeing in Iraq–have FRAMED this argument to fool the American people. It is truly disgusting.

And, here is something I picked up on the cost of this war…

Previously:
Charting the Iraq War
So, How Bad Are Things in Iraq Really?