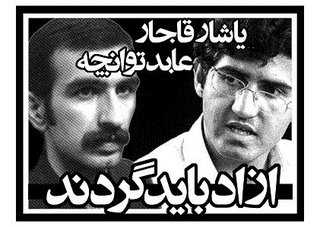 A fellow student told Radio Farda on May 30 that there has been no news of the whereabouts of two activists detained during the previous week’s student protests, the broadcaster reported. The two are Yashar Qajar, the head of the Islamic Students Union at Amir Kabir University, and blogger Abed Tavancheh, who wrote about recent campus protests on his weblog.

Fellow student Abbas Hakimzadeh told Radio Farda that there is no news of Qajar’s whereabouts and no one answers calls to his mobile telephone. The authorities told Tavancheh’s family that he would be released after answering a few questions, Hakimzadeh said, but that was days ago. Hakimzadeh went on to claim that the University Basij wants to bring the hard-line pressure group Ansar-i Hizbullah onto the campus.

Knickerbocker News has more on the fate of Abed Tavancheh.

If you were wondering why the mullacracy would single out Amed, this is from his blog postings from the student protests last week in Tehran as reported at S’CAN IRANIC:

Abed Tavanche reports that it is three days now that the University of Amir Kabir has effectively closed down as a result of the mass protests by the Students. They have done so mainly because the members of the Baseeji (Youth Islamic Militia) faction of the university tried to haijack the elections of the student organisations in the university through the generous assistance of the university authorities…..

He reports that university officials escaped the campus as the protesters were approaching the administrative buildings. Rocks and tomatoes were thrown at the Supreme Leader’s representative’s building, and there were clashes between the students and the police. As to the reasons for the protest, it appears that it is not entirely related to the latest row over the cartoon published in the Iran Newspaper that purportedly insulted the Azeries.

In fact, according to Tavancheh, a Martyrs’ Exhibition was being held in the university at which light rifles and weapons were being exhibited. Baseeji vigilantes upon the pretext of visiting the exhibition had entered the university have been harassing the students and are reported to have been filming the protesters. The students have declared that the protests would continue until the Baseeji vigilantes are removed from the campus and the campus is declared off-limits to them. He also reports that Anti-Riot Police Vehicles have been manoeuvring on the campus of the Tehran University.

The riots at the Tehran University Dormitories have been even more serious leading to clashes with anti-riot police who fired tear-gas bullets at the demonstrators. Tavancheh reports that the police have been using electric batons. He also says that if he writes in his weblog the slogans that the students are chanting he would certainly be executed without trial (here).

This is a brave man of strong words. Let’s pray he is safe.

Winston at The Spirt of Man has more.

Kurdish Media has a report today on the ethnic uprisings in Iran and the regime’s typical violent response.