The protesters are upset that Israel would respond to a militant attack within its borders. 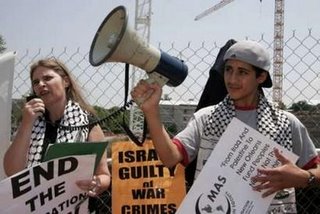 The communist group, International ANSWER, and the Muslim American Society protested at the Israeli Embassy in Washington today against Israel’s aggressive response to the attack, kidnapping and murder of their border solders:

MAS Freedom Foundation questions why the Israelis have chosen a military solution rather than a diplomatic one in resolving the hostage issue of this lone Israeli soldier. Again, Israel has chosen military aggression and collective punishment (blowing up the Gaza power center and destroying bridges), as their standard modus operandi in addressing issues involving the Palestinian people.

Additionally, our government continues to fund this madness using American tax dollars in the amount of more than three billion dollars a year. The U.S. government continuously calls for Israeli restraint, but the realty is that current U.S. foreign policy makes no effort to actually restrain Israel from these aggressive tactics.

Said Mahdi Bray, executive director of MAS Freedom Foundation, “Until our government refrains from embracing this one-sided policy that favors the Israelis unconditionally, community activists and people of conscience must continue to educate the American people that this type of uneven-handed approach is not in America’s best interests, and certainly not in the best interests of peace and stability in the middle east.” The press conference is being sponsored by MAS Freedom Foundation and the ANSWER coalition. 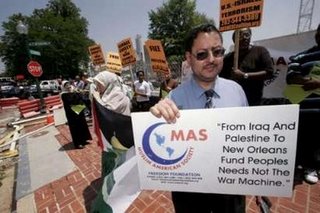 Mahdi Bray, Executive Director of the Muslim American Society, participates in a protest outside the Israeli embassy in Washington, June 29, 2006. (REUTERS/Micah Walter)