** Iraqis know they have a friend in Secretary of State Condoleezza Rice…
Condi blasts her Russian counterpart Foreign Minister Sergei Lavrov in defense of the fledgling Iraqi Government! **

The whole conversation was recorded when a reporter “mistakenly” left a microphone on during the private lunch session between the two officials. 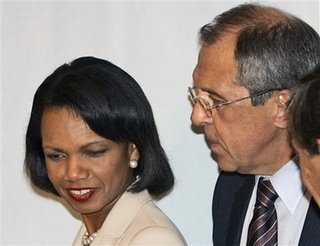 …A recording of the ministers’ private lunch, made when an audio link into the room was accidentally left on,(?) showed that “Condi” and “Sergei” — as they called each other — had several long and testy exchanges over Iraq. The disputes concerned relatively minor wording changes in the five-page statement issued after the meeting, but grew out of basic differences between the two governments over how to proceed on Iraq.

During the meal — the recording picks up the clinking of ice in glasses and the scratch of cutlery on plates — Rice said she wanted to make a few “small points” about a draft statement prepared by lower-level officials. In particular, she said, she was seeking a stronger show of support for the nascent Iraqi government.

“I’m always a little bit sensitive about this on behalf of the Iraqis,” Rice shot back. “Here we sit in Moscow or in Washington or in Paris telling them to make efforts on national accord when their brothers and sisters are being killed. I just think it’s gratuitous.”

Give ’em hell, Condi! It gets better…

Then Rice said she wanted to seek an endorsement of an Iraqi proposal for an “international compact” in which the Baghdad government would have to meet certain broad goals in order to collect aid, similar to a package for Afghanistan. But Lavrov refused, saying the concept was too new and needed more development and support from other countries. He suggested the creation of a forum of neighboring governments to oversee reconciliation in Iraq.

Rice said she worried he was suggesting greater international involvement in Iraq’s affairs.

“What does that mean?” Rice asked.

There was a long pause. “I think you understand,” he said.

Lavrov tried to explain, but Rice said she was disappointed. “I just want to register that I think it’s a pity that we can’t endorse something that’s been endorsed by the Iraqis and the U.N.,” she said, adding tartly: “But if that’s how Russia sees it, that’s fine.”

Lavrov threw out a new concept — that the new Iraqi government had to answer questions about former president Saddam Hussein’s alleged weapons of mass destruction because last week Republican lawmakers in the United States had said there was evidence of chemical munitions.

“I think it’s serious,” he said. “While we want to support this government, we also believe that this government has something to do to finalize the leftovers of the past, which is basically nonproliferation concerns.”

That’s interesting considering all of the rumors about Russian involvement with the Hussein weapons program.

Hopefully, this news reaches the Iraqi media so they know that they have an ally fighting for their future in the international political arena.