In a fundraising e-mail to supporters two days ago, Massachusetts Democratic Senator John Kerry wrote that President Bush would be “sneaking into St. Louis” to raise money for Missouri Republican Senator Jim Talent. 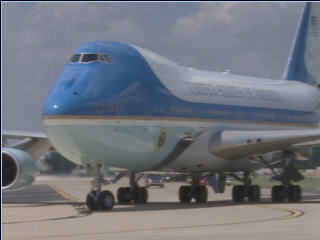 Senator Jim Talent (R-MO) is in on the secret as he “sneaks” out of Air Force One with President Bush in St. Louis. 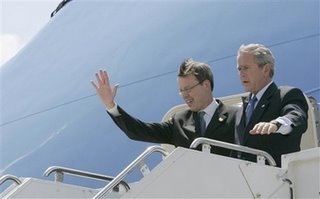 Well, what do you know? Governor Matt Blundt (R-MO) sneaks a photo op out of the secret flight. 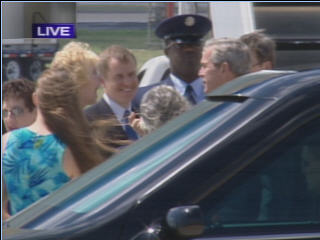 In fact, the president arrived in broad daylight aboard Air Force One for yesterday’s publicly scheduled 6 p.m. fundraiser, which received television coverage.

So how did Kerry respond today? By again accusing the Republican party of “sneaking President Bush” into Missouri, “under cover of darkness.” In yet another fundraising e-mail, Kerry asks potential donors to make the GOP “pay a price” for the president’s “under the radar” travel.

But, George Bush could not fool these nutroot protesters who assembled outside Jim Talent’s fundraising dinner where the president spoke… 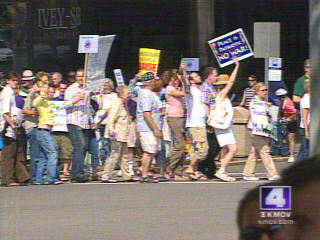 …Before Bush met with Andrew Benecke, 18, valedictorian of Mary Institute and Saint Louis Country Day School and was one of the 2006 Presidential Scholars who is undergoing chemotherapy; then spoke with military personnel returning from Iraq and Afghanistan; and finally took another “secret” flight back to Washington DC.
(Pictures KMOV TVSt. Louis)