Louisiana Governor Blanco won’t be dragging her feet this year!
– Hat Tip Allman and Smash in the Morning – 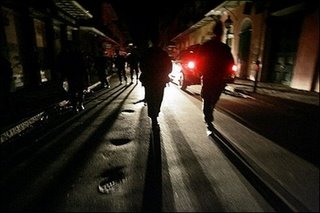 US soldiers patrol the streets of New Orleans’ French Quarter in 2005. The National Guard will return to New Orleans to help control a flood of violent crime, Louisiana’s governor said, after the shooting deaths of five teenagers.(AFP/File/Hector Mata)

Governor Blanco was not about to hesitate in sending in the National Guard to new Orleans this time around. GOP USA has this:

National Guard troops and state police officers were headed for New Orleans to help control a surge in killings, The Times-Picayune said Monday.

Louisiana Gov. Kathleen Blanco said she will speed up efforts to get the Guard troops into the city by Tuesday in response to a request from Mayor Ray Nagin and the City Council.

“I will not tolerate criminal behavior,” the governor said in a statement. “We must protect our citizens.”

Her office said 100 Guardsmen and 60 state troopers will be in the city by Tuesday, but it was unclear how many more Guard would be deployed, the newspaper said.

Suddenly violent crime in New Orleans is a problem for the governor:

The police force has about 1,375 officers now, compared with about 1,750 officers before Katrina. The population of 465,000 has rebounded to about half its size before the storm.

This did not seem to be a problem to the governor in 2005 when the murder rate was surging at ten times the national average before the hurricane destroyed the city.

It is nice to know that fighting crime has become a priority for the governor.