The situation in Ethiopia continues to silently deteriorate. It is a pernicious kind of deterioration: the kind that slowly chips away at freedom and democracy, with the occasional mass killings by the government are tempered by fustian press releases about how “Ethiopia is forging ahead with democracy.” 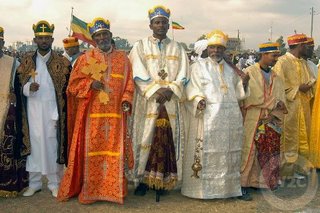 Anthony Mitchell, a season reporter for the AP, was kicked out last November for “tarnishing the image of the nation, repeatedly contravening journalism ethics”, and “disseminating information far from the truth about Ethiopia.” If that sounds like an old Soviet talking point, it’s because it is.

There are now over 17 journalists imprisoned on ‘treason’ charges, but the government is quick to mention how free press is flourishing in the country. (The IPI’s assessment of the draconian press laws can be found here.)

On May 18, the government started blocking opposition websites. By the following week, blogspot.com had become inaccessible in Ethiopia. A lot of Ethiopian dissidents use blogspot to transmit news from Ethiopia, and it is also a popular platform for Diaspora bloggers. Ethan Zuckerman contends this makes Ethiopia a “pioneer” of cyber censorship of this magnitude. Reporters Sans Frontiers and the Committee to Protect Journalists are following the story.

Meanwhile, this bastion of democracy (at least according to Jimmy Carter, who deemed the May elections free and fair before a single vote was cast) has rounded up all the top leaders of the main opposition leadership, including the Mayor elect (a prominent US-educated economist), and charged them with “genocide” and “treason” It is easily the most absurd abuse of jurisprudence in recent history. Amnesty International has details here.

In the latest assault on the free press, the Ethiopian government has barred the leader of the International Federation of Journalists from entering the country.

So what does the Ethiopian government get for all these transgressions? A $1.05 Billion aid package from the World Bank.

The aid proposal has presented [Paul] Wolfowitz with one of the thorniest dilemmas he has faced in the year since he took the World Bank’s helm. As a top Pentagon official in the Bush administration, he was a prime advocate of using U.S. power to spread democracy.

The Ethiopian people can stand up to the tyranny of the Ethiopian government that has used its “partner on the war on terror” as a perfect cover to terrorize its people. (The US had to stop selling it Humvees meant for the war on terror when the ruling party started using it as a tool to squash peaceful protests.) But how can they fight the World Bank?

If this was just another rouge government we suppose we could yawn and move on. But this is a key US ally in the volatile Horn of Africa. It has 77 million people, and is one of the most ancient countries in the world. We need it as a stable ally in order to curb the festering anti-Americanism in neighboring Somalia, Sudan, and Eritrea. All we are asking is for people to tell the story.

Ethiopundit, the most prolific Ethiopian blogger, opines in Meles Love You Long Time.

Egoportal, a young blogger from Addis Ababa, has a biting satire on the Meles regime.

CoffeechilliSun proclaims Ethiopian bloggers will Stay Stronger Than Ever

Weichegud ET! Politics asks Condi Rice what her threshold is.

Dr. Solomon Terfa tells the Carter Center that the ‘silence is deafening.’

All Ethiopians want is a chance at democracy. They can take care of themselves.

“We don’t want money. We don’t want bread. All we want is for this government not to take away our hope.” These are the words of a young Ethiopian girl who was mourning her little brother’s death. (He was shot in the head while walking back home from school.)

If we pay attention now, we won’t have to wring our hands later when thousands of Ethiopians die. It took the world two years to notice Darfur. Hopefully, it won’t take that long for the world to say “no” to a government poised to hold on to power by any means necessary. Ethiopia is an avoidable disaster.

We thank Congressman Chris Smith (R-NJ) for rallying to the Ethiopian people. HR 4423 will be part of his legacy. We hope his colleagues in the Committee on International Relations will pass the bill and give the House a chance to give Ethiopians hope.