Israel turned up the pressure in Gaza today as more kidnappings were announced,
VIDEO HERE

Update: The Palestinians executed the kidnapped teen. Israel says his body is badly burned. (more below)

** Syria fires on Israeli jets! **
– Syria claims that they forced the Israelis to flee.

A third Israeli has been kidnapped this time by Fatah as the situation escalates in Gaza! 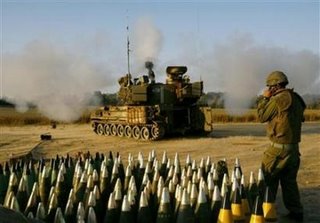 An Israeli 155mm mobile artillery unit fires towards Gaza from Nahal Oz at the border of Israel and Gaza strip June 28, 2006. (Yannis Behrakis/Reuters)

Suzie at Assorted Babble has a roundup of today’s news.
Allah notes that Fatah has kidnapped a third Israeli, a 62 year old man.

Jewish Leftists were hoping that after Hamas killed two Israeli soldiers and kidnapped another within Israel’s border that the government should negotiate. 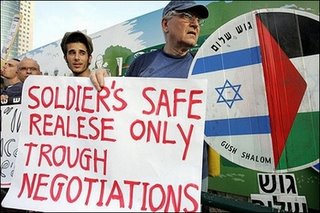 Israeli left wing activists protest against the military operation in the Gaza Strip in front of Defence Ministry in Tel Aviv. (AFP)

Egypt has asked Hamas to release a kidnapped Israeli soldier and has deployed 2,500 extra troops along its border with Gaza, officials said yesterday in a sign of how worried Arab countries have become about possible fallout from the latest Israel-Palestinian crisis.

Egypt’s chief of intelligence, Omar Sulaiman, urged the leader of Hamas, Khalid Mesha’al, who is in exile in Syria, to push for the release of Corporal Gilad Shalit, the Israeli soldier who was seized by Palestinian militants in a raid from Gaza on Sunday, the Egyptian officials said.

Israel has massed tanks and soldiers on its Gaza frontier and threatened to move into the territory unless the soldier is released. It has also closed its crossings with the Gaza Strip, stopping all movement of people and goods.

An Israeli incursion into Gaza would be likely to cause large numbers of Palestinians to flee to northern Egypt, where many have family members.

Mohammad Nazal, a member of the Damascus-based Hamas politburo, confirmed the Egyptian mediation but said the group won’t agree to release the Israeli soldier “without a deal.”

Israeli warplanes have flown over one of the Syrian president’s palaces to warn Damascus against supporting Palestinian fighters who abducted an Israeli soldier, the Israeli army says.

An Israeli army spokeswoman said the planes flew over Bashar al-Assad’s palace near the city of Latakia, “because the Syrian leadership supports and harbours terrorist leaders, among them Hamas, the kidnappers of the soldier”.

The armed wing of Hamas was among the three factions that took part in the cross-border raid from Gaza in which the Israeli soldier was seized on Sunday, but it has not said it is holding him.

Update: (8:00 CST) Israel learned tonight that the Palestinians have executed the kidnapped teen:

Israeli forces rounded up Palestinian Cabinet ministers and lawmakers from the Islamic Hamas, increasing pressure on the Islamic militants to release a captured Israeli soldier, and witnesses said tanks moved into northern Gaza, widening Israel’s largest military operation in the year since Israel pulled out of the seaside territory.

Palestinian security officials said Israeli forces detained the Palestinian deputy prime minister, Nasser Shaer, and three other Cabinet ministers, as well as four lawmakers in the West Bank city of Ramallah. Two others were arrested in the town of Jenin, they said, and Israeli media reported a roundup of Hamas lawmakers in Jerusalem and other locations.

The military refused to comment. Israel blames Hamas for the attack Sunday in which two soldiers were killed and a third captured when militants tunneled under the border and attacked an army post, setting off the invasion.