Iraq described how the bombing was organized and says details were taken from the confessions of the captured Abu Qudama:

4 Saudis, two Iraqis and one Tunisian entered the mosque at night, handcuffed and locked up the guards in a room and spent the night planting the bombs all around the mosque. Next day they kidnapped and murdered Atwar Bahjat while she was trying to cover the news of the bombing. 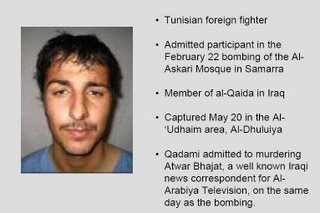 Today the murderous Mujahedeen Shura Council, the same group that took credit for slaughtering American soldiers Private Kristian Menchaca of Houston and Private Thomas Tucker of Oregon and also took credit for beheading the kidnapped Russians this week claimed that Al Qaeda was not behind the Golden Mosque blasts:

“We call on our Muslim brothers not to be deceived by these exposed lies,” the Shura Council said in a statement posted on an Islamic Web site that is known for carrying militant messages. It was not possible to verify the authenticity of the statement.

The Shura Council recalled that after the Feb. 22 attack on the shrine, it issued a statement denying responsibility and blaming the Iraqi government.

The shrine bombing provoked a ferocious round of violence between Shiites and Sunnis including a number of attacks on mosques. More than 20,000 families have been displaced since the Shrine was destroyed.

Of course, there aren’t a whole lot of Tunisians fighting in Iraq who are not Al Qaeda, but the Shura Council did not attempt to explain that today.

(Maybe The Jawa Report can make sense of this latest news since they are back online after their two week Turkish cyberattack nightmare. Welcome back!)