“Because you had the courage to lead, Hungary became the first communist nation in Europe to make the transition to democracy.”

President Bush tells Hungarians, “Liberty can be delayed, but it cannot be denied.”
Reuters Video HERE 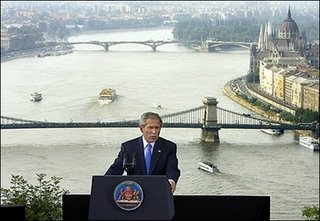 US President George W. Bush delivers remarks from atop Gellert Hill in Budapest. Bush said that former communist Hungary’s long fight for freedom was an inspiration for Iraq as it struggles to solidify its democracy, in a ceremony on the 50th anniversary of the failed uprising here against Soviet rule.(AFP/Paul J. Richards)

President Bush honored the patriots of Hungary today in rememberance of the 50 Anniversary of the Hungarian uprising:

Hungarian troops are also defending freedom’s cause in the war on terror. In Afghanistan, your soldiers have rebuilt schools and a medical center. They’ve helped train Afghan police to enforce the rule of law, and to protect the Afghan people. In Iraq, Hungarian troops played a vital role in Operation Iraqi Freedom by providing security and delivering food and medical supplies to coalition forces. Today, Hungarian soldiers are helping to train Iraqi security forces. This is important work. By supporting these two young democracies, you are strengthening two new allies in the war on terror, and you’re bringing hope to millions of people in a vital region of the world.

The Hungarian people know well the promise of freedom. Many of you lived through the nightmare of fascism, or communism, or both. Yet you never lost hope. You kept faith in freedom. And 50 years after you watched Soviet tanks invade your beloved city, you now watch your grandchildren play in the streets of a free Hungary.

The lesson of the Hungarian experience is clear: Liberty can be delayed, but it cannot be denied. The desire for liberty is universal, because it is written by our Creator into the hearts of every man, woman, and child on this Earth. And as people across the world step forward to claim their own freedom, they will take inspiration from your example, and draw hope from your success.

Your great poet Peteofi said this:

“Here is the time, now or never!
Shall we be slaves or free?
This is the question, answer!
By the God of the Hungarians we swear,
We swear to be slaves no more!”
These words were addressed to the Hungarian people, yet they speak to all people, in all times. This is the spirit that we honor today. I appreciate the opportunity to come to this great country and to celebrate the Hungarian example — the courage, the sacrifice, the perseverance that has led to this democracy.

On behalf of all Americans: Köszönöm. May God bless you all. Thank you very much. (Applause.)

What a breathtaking view!

Hungarians gave Bush a standing ovation despite the rantings from Newsweek. 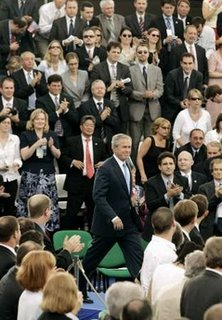 A. M. Mora y Leon at Publius Pundit has more on the courageous uprising in Budapest 50 years ago.

Elephants in Academia explains how Soviet tyranny was not the end of the story for Hungary.