Bush gets blamed for the death of a journalist… 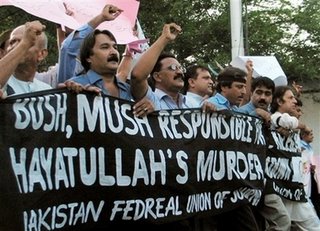 Pakistani journalists hold a rally to condemn the killing of photo journalist Hayatullah Khan, Monday, June 19, 2006 in Karachi, Pakistan. Scores of Pakistani journalists rallied for a third consecutive day and stormed out of Parliament in Islamabad to protest the killing of a photographer who reported the death of an al-Qaida operative in a U.S. missile strike. Hayatullah Khan was shot dead and his body dumped Friday in the town of Mir Ali.(AP Photo/Shakil Adil)

And, in Austria… these “Gitmo” protesters waiting on President Bush look foolish on a news day when it is reported that Islamic militants barbarically mutilated two US soldiers. At least they look well fed like the Al Qaeda detainees in Cuba. 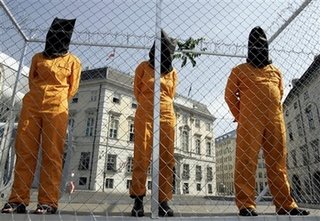 Activists of the Austrian Greens dressed up as Guantanamo detainees protest in front of the federal chancellery, seen in the background, in Vienna. (AP)