Kofi Annon is planning a trip to Zimbabwe in two weeks to help resolve the growing crisis. 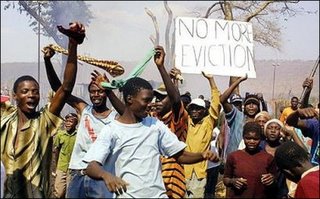 Residents wave a placard reading “No more evictions” in the Porta Farm slum, west of Harare, Zimbabwe, in 2005. (AFP/File)

After “Operation Drive Out the Filth” last year where 700,000 saw their homes destroyed, and “Operation Roundup” two weeks ago where street children were herded up and sent to a “farm”, Zimbabwe has launched “Operation Cleanup” another round of tossing the poor out of the capital Harare:

The demolitions began at the crack of dawn on Thursday, when truckloads of municipal police raided the high-density suburb of Glen Norah in Harare and brought down “illegal” structures with crowbars and set them alight. More than 400 people were affected, including school children.

Last winter the government launched ‘Operation Murambatsvina’ (Drive out Filth) in cities and towns across the country. The campaign to demolish informal settlements left over 700,000 people homeless or without a source of income and was met with widespread condemnation from human rights bodies, including the UN.

Martha Manda, a widow with two children, was inconsolable as she watched her house go up in flames on Thursday. “I have nowhere to go now. My grandparents came from Malawi and settled in this country as migrant labourers. As a result, I cannot go back to Malawi because I don’t know anybody there.”

Authorities said the people being weeded out of urban areas should return to their rural villages of origin, but although many have done so, the descendants of migrant workers from Mozambique, Malawi and Zambia have been left in a quandary.

The mayor of Harare, Sekesai Makwavarara, informed residents of the new operation, saying: “as residents you should support the council and government when they embark on the clean-up exercise”.

Two weeks ago the government launched what it called ‘Operation Round-up’, in which street children and homeless people were picked up and dumped at a farm outside Harare.

Zimbabwe is also hoping to clean up the inflation rate which stands at 1,195.5%!