The “Go to Hell!” protesters were out in force today in London. 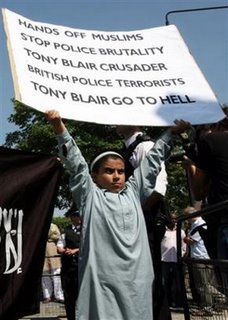 A young Muslim in East London holds up a placard during a protest against the treatment of the Muslim community by British police in London, Friday, June 9, 2006. About 100 people demonstrated outside a London police station, chanting and waving placards a week after officers shot and wounded a man during an anti-terror raid. (AP Photo/Simon Dawson)

In a previous London Muslim protest in February a former crack dealer showed up wearing a suicide bomber vest in protest of a cartoon of Muhammad dressed as a bomber. Selling crack is an offense which carries a mandatory death sentence in some Muslim countries. 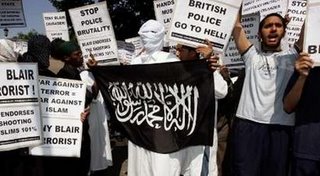 Demonstrators shout during a protest in Forest Gate, east London, June 9, 2006. A small group of radical Islamists demonstrated outside Forest Gate police station in east London on Friday in protest over last week’s big raid on a nearby house by police looking for a chemical bomb. Police on Thursday defended the raid which provoked anger from Muslim groups after detectives said no device had been found. The banner in Arabic reads ‘There is no god but Allah and I declare that Muhammad is the Messenger of Allah’. (REUTERS/Luke MacGregor)

The Anti-Blair, Anti-Police protests were held despite appeals from the arrested men’s families to back off:

Two hundred demonstrators have protested outside a police station against last week’s massive anti-terror swoop on a house in east London. Chanting “Tony Blair terrorist” and “Hands off the Muslims” the protesters waved placards and shouted insults at scores of watching police officers. The protest was called despite appeals from the family of two men arrested in the raid to back off.

One of the arrested men was shot during the operation. Muslim groups said the action was excessive and had inflamed fears in their community.

The family of the two men distanced themselves from the protest.

“This will only provide another opportunity for our community to be portrayed in a negative light,” Humeya Kalam said. 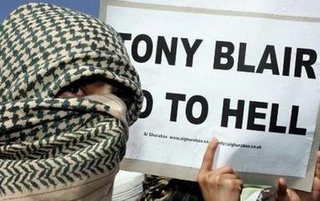 Sugiero has more on this London protest today. 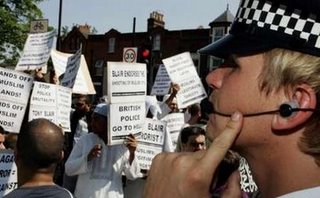 A small group of radical Islamists demonstrated outside Forest Gate police station in east London on Friday although there were estimates of up to 1,000 demonstrators at the protest. (Reuters)

Now, what is the correct response to a protest like this again?