This time it’s for real!… The New Balance-wearing, bumbling, head chopping terrorist of Iraq is finished!

Video shows the 500 pound bomb blast, HERE!
Yep!… That would do it!

Zarqawi’s hiding place… not so hidden 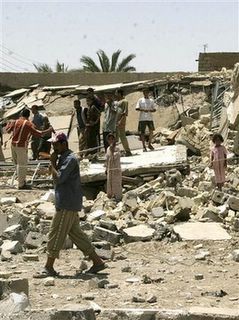 Iraqis sift through the rubble after a U.S. raid, which killed Al Qaeda’s leader in Iraq, Abu Musab al-Zarqawi in the town of Hibhib near Baquba, 65 km (40 miles) northeast of Baghdad, June 8, 2006. (Helmiy al-Azawi/Reuters)

Tony Snow has an answer to the Kos-Kids and our strange mainstream media (via Mary Katherine Ham at Hugh Hewitt):

“This was not PR. PR is selling soap. This is building a basis for democracy in Iraq.” 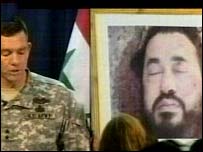 Militant leader Abu Musab al-Zarqawi is killed in Iraq, in an operation hailed by US President George W Bush as a serious blow to al-Qaeda. (BBC)

KILLED IN AN AIRSTRIKE!

Abu Musab al-Zarqawi, al-Qaida’s leader in Iraq who led a bloody campaign of suicide bombings and kidnappings, has been killed in an air strike, U.S. and Iraqi officials said Thursday, adding that his identity was confirmed by fingerprints and a look at his face. It was a major victory in the U.S.-led war in Iraq and the broader war on terror.

Prime Minister Nouri al-Maliki said al-Zarqawi was killed along with seven aides Wednesday evening in a remote area 30 miles northeast of Baghdad in the volatile province of Diyala, just east of the provincial capital of Baqouba, al-Maliki said.

Loud applause broke out among the reporters and soldiers as al-Maliki, flanked by U.S. Ambassador Zalmay Khalilzad and U.S. Gen. George Casey, the top U.S. commander in Iraq, told a news conference that “al-Zarqawi was eliminated.”

And, just think, this was only possible because the Murtha “cut and run” plan was avoided. 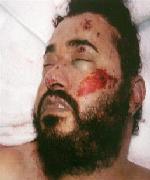 This video image displayed by the U.S. Military at a press conference in Baghdad, Iraq Thursday, June 8, 2006, purports to show the body of Abu Musab al-Zarqawi, al-Qaida’s leader in Iraq who led a bloody campaign of suicide bombings and kidnappings, who was killed in an U.S. air strike Wednesday, Iraq’s Prime Minister Nouri al-Maliki announced Thursday, June 8, 2006. (AP Photo/U.S. Military) 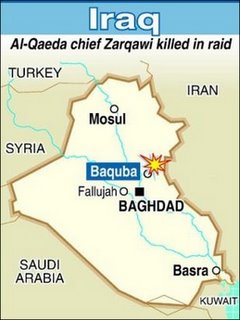 Map locating the Iraqi town of Baquba where al-Qaeda militant Abu Musab al-Zarqawi was killed in an air strike.(AFP)

Iraqi and Jordanian intelligence helped to identify his location:

Al-Maliki said the airstrike was the result of intelligence reports provided to Iraqi security forces by residents in the area, and U.S. forces acted on the information. Casey said the hunt for al-Zarqawi began two weeks ago, and his body was identified by fingerprints and facial recognition.

A Jordanian official said Jordan also provided the U.S. military with information that helped in tracking al-Zarqawi down. The official, who spoke on condition of anonymity because he was addressing intelligence issues, would not elaborate, but Jordan is known to have intelligence agents operating in Iraq to hunt down Islamic militants.

The White House welcomed this news early this morning.

A very good day for Iraqi Prime Minister Nuri al-Maliki and all Iraqis! 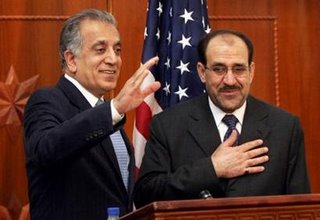 Wow! Michelle Malkin must have a hotline with the Pentagon! She is on it!
The brothers at Iraq the Model have more on Hibhib where the incident took place.
Stefania says that the “World anti-war crowd lost one of its comrades today.”
Austin Bay liveblogged the President’s remarks.
Pajamas Media has a roundup of reaction to the news.
Milblogs is all over it. Congratulations, Soldiers and Marines!
Hammorabi! It is so good to see the good news from his site!
Sandmonkey is celebrating this great news!
Glenn Reynolds has a super roundup.
Lori Byrd at Wizbang has blogger reaction and reminds us of the unanswered questions from the Nick Berg story.
Dr. Sanity has “reality-based” (moonbat) reaction.
Couterterrorism Blog reports on the termination.
The Anchoress files this news under “Bush Good.”
Alexandra has links to all of the news.
The Jawa Report pleads for more cowbell.
Powerline reports that Al Qaeda in Iraq is rejoicing the glorious news! Yeah, right!

Well keep rejoicing, cuz there’s more where that came from!!