Top 11 Things Anti-War protesters would have said at Omaha Beach back on D-Day. 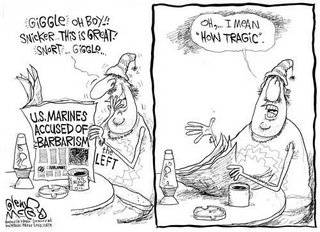 The Coaltition of the Swilling has thoughts on what our Marines go through on a daily basis:

Last summer, in two separate attacks over three days, Taliban-like insurgents operating from bases at mosques in the city killed 20 Marine reservists, including an enlisted man who was shown disemboweled on rebel videos that were sold afterward in Haditha’s central market. “

I mean, dear GOD! what these kids are going through defies description.