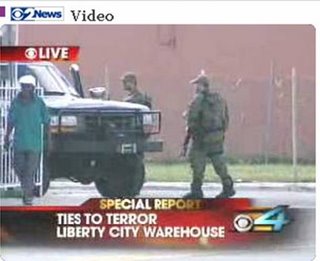 5 of the men are American citizens, one man is from Haiti, and one is from an undisclosed country. The jihadists thought that if they brought down the Sears Tower they would topple the US economy. The FBI headquarters in Miami was also a target.

Seven men were arrested today in Miami on terrorism charges. They were wanting to wage jihad against the United States:

“We do have an ongoing operation in Miami. We are conducting a number of arrests and searches and we’ll have more about that when the operation is concluded — probably tomorrow morning,” FBI Director Robert Mueller said in an interview with CNN.

A CNN reporter in Miami said the operation was taking place in the Liberty City district. She said there had been several arrests but there was no threat to Miami or other American cities. There would be a news conference in Washington on Friday to give further details, she said.

The arrests took place Thursday afternoon at the Scott Housing Projects in the area of NW 68th street and 15th Avenue. Miami Police officers were seen in the area securing a perimeter for the FBI to carry out their arrests.

The men were arrested at a local housing project:

Sources tell CBS4 News it is unclear whether weapons or bomb-making materials were found, but those detained are suspected of being involved in planning terrorist activity.

Neighbors say suspicious activity had been observed at the home recently.

Two months ago, a pair of Atlanta men, one a Georgia Tech engineering student, were arrested not long after communicating by e-mail with two of the suspects arrested in Canada over the weekend. The Atlanta men are charged with videotaping domestic targets, including the U.S. Capitol and the World Bank.

This is nothing new for southern Florida… “South Florida has been linked to several terrorism investigations in the past. Several of the Sept. 11 hijackers lived and trained in the area, including ringleader Mohamed Atta.”

Jay Stephenson has more on the jihadists.

AllahPundit has a huge roundup.