“All these damn notes we’re writing to each other as if we’re talking, as if the FBI is watching.”

Despite his repeated claims of innocence, FBI agents have video of Jefferson taking a $100,000 bribe in $100 bills. 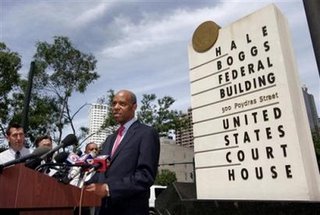 U.S. Rep. William Jefferson, D-New Orleans, speaks to the media at a news conference in New Orleans on Monday May 15, 2006. Congressman Jefferson declared his innocence in light of a federal bribery probe.(AP Photo/Alex Brandon)

“The government’s actions in obtaining a search warrant to search the offices of a United States Congressman were outrageous,” Robert Trout, attorney for Jefferson, said in a statement. “We are dismayed by this action — the documents weren’t going anywhere and the prosecutors knew it.”

According to court documents released today, Jefferson was caught on tape by the FBI accepting bribes totalling $100,000 in $100 dollar bills:

A congressman under investigation for bribery was caught on videotape accepting $100,000 in $100 bills from an FBI informant whose conversations with the lawmaker also were recorded, according to a court document released Sunday. Agents later found the cash hidden in his freezer.

At one audiotaped meeting, Rep. William Jefferson, D-La., chuckles about writing in code to keep secret what the government contends was his corrupt role in getting his children a cut of a communications company’s deal for work in Africa.

As Jefferson and the informant passed notes about what percentage the lawmaker’s family might receive, the congressman “began laughing and said, ‘All these damn notes we’re writing to each other as if we’re talking, as if the FBI is watching,’” according to the affidavit.

Jefferson said earlier that he will not step down from his House seat.

Glenn Reynolds has more including news about the $90,000 stash in the refrigerator.