Tony Blair made a surprise visit to Iraq today to congratulate the newly elected leaders.

Blair was the first world leader to sit down with the Iraqi Prime Minister Nouri Al-Maliki who told his cabinet on Saturday, “We will defeat terrorism just as we defeated despotism.” 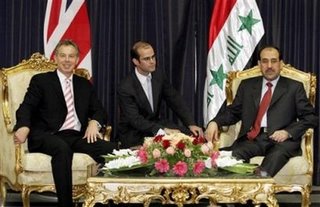 Tony Blair made a surprise trip to Iraq today to congratulate the new Iraqi Leaders and to promote his new government that was sworn in this weekend:

Blair said Britain, the main ally in the US-led invasion of March 2003, would work with the new government “to make the hopes and expectations of the Iraqi people for the future a reality” and voiced support for a call for an international conference on Iraqi debt and reconstruction.

“Iraqi people are about to take charge of their own destiny and write the next chapter of Iraq history themselves,” said Blair, on his fifth visit to Iraq since the invasion and the toppling of Saddam Hussein in April 2003.

“There is now no excuse for people to carry on with terrorism and bloodshed.”

He said peace in Iraq would pave the way for the withdrawal of foreign forces, which include about 8,000 British troops.

Atlas sees green pastures ahead in the Iraqi desert. (via Lori Byrd)

Kim Priestap at Wizbang shares more on how Tony Blair stood his ground when times got tough.