John Stephenson writes today about the latest pro-life display to get trashed on a college campus.

This time they left coat hangers.

Are we looking at a new leftist trend? 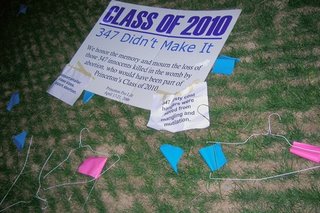 Princeton is the latest school to be the target of leftist violence. A pro-life display at the Ivy league school campus was trashed late last Thursday night:

The 347 flags on the north lawn were meant to represent the lives of students who might have become members of the University’s Class of 2010 had abortion not been legalized.

Caroline Chopko ’07 saw the destruction at 4:15 a.m. and immediately sent Haine an email to inform him of the damage.

“I was kind of sad that Princeton students would choose to add in such destruction,” Chopko said of the damage. “But I was happy that people are discussing the issue.”

When Haine woke up at roughly 7 a.m. Thursday, he saw Chopko’s email and went to Frist to see the damage for himself.

The pink and blue flags were pulled out of the ground and there were “strewn coat hangers all around,” Haine said.

In addition, the sign in front of the display was trampled and signs were put in place that read “support smaller class sizes: support abortion” and “347 rusty coat hangers were saved from mangling and mutilation.”

The news did make the front page of the Daily Princetonian 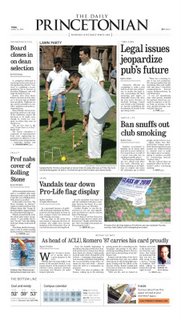 Security is still investigating this latest free speech violation by the Left.