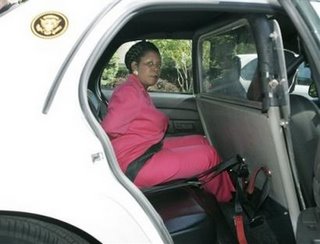 Rep. Shelia Jackson Lee, D-Texas., sits in the backseat of a police squad car after being arrested during a demonstration outside the Sudanese Embassy as part of a protest against genocide in Sudan’s embattled Darfur region, Friday, April 28, 2006 in Washington. (AP Photo/Pablo Martinez Monsivais)

The libs continued their silly protesting on Sunday.

George Clooney is complaining that the U.S. is waiting too long to send troops into Sudan:

“Is the American government slow to act? Of course we’re slow to act, we always are,” Clooney said… (Except, of course, in Iraq, where we needed to wait another 10 years and another 14 UN resolutions!)

…So now they want to send troops into an oil-rich, predominantly Muslim country, with suspected ties to al-Qaida and WMDs, that’s experiencing genocide?

How very chicken-hawkish of them.

Jose Guardia emails: “Yeah, it’s great that some people are marching against the genocide in Darfur; and no, I can’t understand either why for them for them it’s OK to intervene militarily in Darfur and it wasn’t in Iraq. Anyway, just wait until -if- Bu$Hitler starts making plans for an intervention. You’ll see how fast they start chanting ‘No War.'”

Question: What are the libs going to do if the negotiations fail?
Answer: Dust off the paper-mache’ and hold another rally.

And, yes, I am all for taking action on Darfar.

Atlas Shruggs, who has been follwoing the Darfur story closely, has much on Sunday’s “tongue without bones” protest including this: