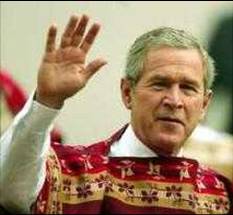 Take the edge off, amigo…
Señor Bush’s speech tonight will either ignite his conservative base or tank his approval rating to the teens in the next liberally lop-sided mainstream poll.

Knowing how crucial this is for George Bush, the future of the Republican Party, and the possibility that an Al Gore type who sees only made-up wars and universal healthcare in your future, here’s a drinking game to take the stress off for you and all of your liberal and conservative friends while watching El Presidente’s Address this evening.

We all know that George Bush does not drink, despite the rumors, so here’s a way for you to show your support for the president and for Mexican President Vicente Fox while you enjoy the president’s speech tonight.Si?!

By morning you will know how well the speech went by how bad the hangover is.

Update: Allah at Hot Air has a few more phrases that I left off. Mucho gracias!…

Play along at home. I figure I’ll be unconscious by around ten after eight, so if there are no evening posts tonight, don’t wonder why.

If the letters on your keyboard start running together, La Shawn Barber will be live-blogging.

Michelle Malkin has a large roundup of reaction today. She will be on O’Reilly immediately after the talk to give her opinion of the president’s speech.
California Conservative will be leading you all in the new national anthem later this evening.