In Mexico today they are pushing a “Don’t Buy Gringo Products” Day despite the fact that a quarter of formal private-sector jobs with regular pay in Mexico are provided by U.S. firms. 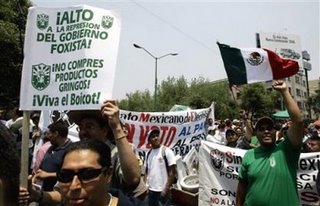 Mexican workers hold signs reading ‘Don’t Buy Gringo Products. Long live the Boycott,’ as they demonstrate in Mexico City, Friday April 28, 2006. A demonstration Friday by thousands of Mexican workers to promote union solidarity turned into a protest against America’s vast influence on the nation’s economy, with many protesters saying they will take part in a boycott of all things ‘gringo’ next week. (AP Photo/Eduardo Verdugo)

The “Nothing Gringo” Boycott will coincide with the “Day Without (Illegal) Immigrants” rally today in the United States. Some activists now fear that there may be some backlash from the fact that Mexicans will be boycotting American goods today as illegal immigrants march throughout the country demanding amnesty:

South of the border, Mexicans are targeting American stores and chain restaurants — “That means no Dunkin’ Donuts, no McDonald’s, Burger King, Starbucks, Sears, Krispy Kreme or Wal-Mart,” reads one e-mail making the rounds.

But even activists are confused about which companies are U.S.-owned. Sears is cited by boycott organizers, despite the fact that Sears’ Mexico stores were bought by Mexican billionaire Carlos Slim in 1997. And few organizers mention Vips — the chain of ubiquitous Mexican diners — even though they are owned by Wal-Mart Stores Inc.

A quarter of Mexico’s formal private-sector jobs with regular pay are provided by U.S. firms, according to the chamber, including Walmex, the Mexican Wal-Mart subsidiary that is the nation’s biggest private employer with 140,000 workers. Delphi Corp., the U.S. auto parts maker, is second with 70,000 workers.

So, are these protesters saying that an Ontario boy committed suicide because of HR4437? Somehow, I am not convinced. (Notice the communist Che Guevara sign in the background) 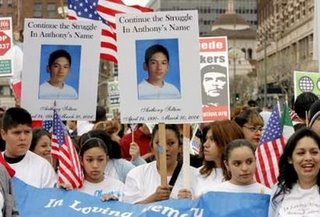 Friends and relatives of Anthony Soltero join thousands of demonstrators during a march through the streets of downtown Los Angeles to protest against HR4437, a proposed legislation that cracks down against illegal immigrants, April 15, 2006. The march was dedicated to Soltero, a 14-year-old Ontario boy who committed suicide after marching in a student walkout. (REUTERS/Lucas Jackson)

Meanwhile, across the United States, illegal immigrants and their supporters are demanding amnesty as they plan another round of massive protests across the country today:

In the country’s midsection, the owners of Cargill Meat Solutions told some 15,000 workers that beef and pork plants in Iowa, Nebraska, Illinois and other states would close for the day, and, in the case of five of the seven Cargill facilities, open for business next Saturday instead.

The wide range of plans set out by companies in recent days reflected a broader uncertainty about what would actually happen today in scores of cities and towns.

Also, today the American-Spanish National Anthem, the one that was recorded in Mexico City; Madrid, Spain; and Puerto Rico, will be played on the radio and at protests nationwide.

Slapstick will be reporting on the Denver Rally today.

Wizbang– Protesting our right to break your laws. Hah!
The Coalition of the Swilling says, “Buy Gringo, Compadre!”

Pajamas Media, Powerline News and HotAir will be covering the protests.