Ray McGovern, the man who heckled Rummy on Thursday, has a trail of lunatic behavior a mile long… But, to the mainstream media, he’s just your average “retired CIA analyst!”

Ray McGovern: “The Government May Be Manufacturing Fake Terrorism” 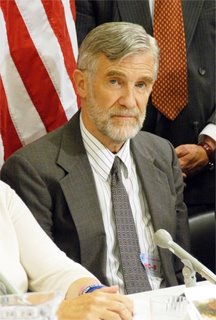 In June of 2005, Ray McGovern blamed Zionists for starting the War in Iraq:

The session took an awkward turn when witness Ray McGovern, a former intelligence analyst, declared that the United States went to war in Iraq for oil, Israel and military bases craved by administration “neocons” so “the United States and Israel could dominate that part of the world.” He said that Israel should not be considered an ally and that Bush was doing the bidding of Israeli Prime Minister Ariel Sharon.

“Israel is not allowed to be brought up in polite conversation,” McGovern said. “The last time I did this, the previous director of Central Intelligence called me anti-Semitic.”

Thank God that “Jews feel Democrats fundamentally believe it is important to make sure that American Jews feel comfortable being American Jews,” or, that accusation by Ray McGovern would sound horribly anti-Semitic.

Via The Jawa Report…

And, don’t forget Ray McGovern’s trip to the White House in January…
(This one is my personal favorite.) 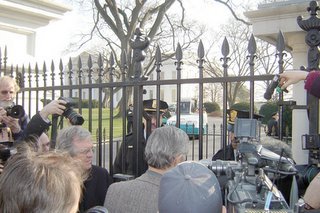 Allah has the poop on this moonbat.

Update: Zombie has pictures of McGovern with Mama Moonbat.

LGF has a moonbattarama roundup on McGovern.