Do you think we can stop calling this Anti-war dem a “Hawk” now?

It’s sad that this “war crimes conspirator” is the best the democrats have to offer on Defense… very sad.

Democrats have thrown low blows plenty of times at the military but this throbbing crotch shot fired at US marines who are charged and not convicted of any crime is a disgrace. Shame on John Murtha!

So nice of the democratic Hawk to give every Anti-American Leftist group more ammunition to lob at America. Thanks, John! 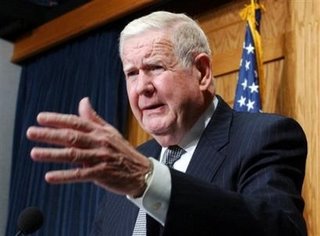 John Murtha goes one step closer to “Osama is really in Kansas” today in claiming US marines slaughtered “many more innocent Iraqis than originally reported”.

This is not the first time that bogus charges have been brought against US forces but certainly they are a first for a supposed hawk.

A March 27 Time magazine report published claims by an Iraqi civil rights group that the Marines barged into houses near the bomb strike, throwing grenades and shooting civilians as they cowered in fear. The report prompted calls for a Pentagon probe.

“There was no firefight. There was no [bomb] that killed those innocent people,” Murtha explained, adding there were “about twice as many” Iraqis killed than Time had reported.

No official investigation report has been released by the Pentagon and a spokesman for Murtha was unable to add to the congressman’s remarks.

The US military is wondering where he is getting his information:

“I do not know where Rep. Murtha is obtaining is information,” said Lt. Col. Sean Gibson, a spokesman for Marine Corps Forces Central Command in Tampa, Fla. “Thoroughness will drive the investigation.”

Three Marine officers from the battalion that is under investigation, including battalion commander Lt. Col. Jeffrey Chessani, were relieved April 7 for “lack of confidence in their leadership abilities stemming from their performance during a recent deployment to Iraq.” Officials would not tie those firings to the Haditha investigation, however. The two other Marines who were relieved, Capts. Luke McConnell and James Kimber, were company commanders within the battalion.

Newsbusters has his interview tonight on Hardball where he defends his “in cold blood” accusations:

MURTHA: Well I’ll tell you exactly what happened. One Marine was killed and the Marines just said we’re gonna take care…we don’t know who the enemy is, the pressure was too much on them, so they went into houses and actually killed civilians and…I…

MATTHEWS: Was this My Lai? When you say cold blood Congressman, a lot of people think you’re basically saying you’ve got some civilians sitting in a room or out in a field and they’re executed on purpose…

MATTHEWS: …not because any of the Marines are scared or anybody is scared…

MURTHA: …this was not an action…this was not…first they tried to say it was an IED, there was no IED involved in this. This was troops, they were so stressed out, they went into houses and killed children, women and children. 24 people they killed.

The Political Pitbull has the video.

Earlier this week Murtha called for pullout of troops from Iraq in a commencement speech at Seton Hill University. This did not go over well then and there are still people upset with his shameful politicking.
One student even walked out on his outrageous speech!

How sad it is that this anti-war leftist continues to use bogus numbers in justifying his surrender plans.

The Mudville Gazette is not amused.
Hugh Hewitt says he cannot imagine a more irresponsible statement from a Congressman. Here’s one.
Blue Crab Boulevard is calling for his resignation. I’ll second!
California Conservative says it best.
Michelle Malkin has a large rehash of blogger reaction.
Sweetness and Light says:

“Murtha (probably, rightly) figures as long as he keeps this up nobody will dare go after him for him and his brother’s defense kickback scams.”