Either it will be a day where the Senate gets clear on Border Security or it will be more BS!

Senate Majority Leader Bill Frist says that he will bring the “border security issue first” back to the Senate floor on Monday,
FOX VIDEO HERE

Maybe Republican Senators are starting to get the message. 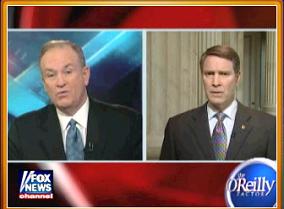 Senate Majority Leader Bill Frist made an appearance on the O’Reilly Factor last night to talk about the border security issue:

Senator Frist: I tell you though, I’m going back. I’m going to take the immigration border security first and foremost back to the floor of the Senate on Monday. I know there is a lot of discussion about 12 million people here illegally, temporary worker program, but I am absolutely committed to making sure that at least coming off the Senate floor we have strong border security legislation.

I agree that you can’t focus on the the 10-12 million people first. It’s got to be on the border…

O’Reilly: The Republican Party’s whole future is riding on the next few weeks Senator. Because if you don’t do anything, people are going to just throw up their hands.

It sounds like Senator Frist is starting to get the idea!

Polls consistently show that Americans want a secure border first and foremost. And, like O’Reilly said, “this is critical to the future of the Republican Party!”

Americans expect the Republicans to do something about this crime and the neglect to our nation’s security. Since October, **over 720,000 illegals** were arrested at the Mexican border. Estimates by border security agents are that only one out of four or five are arrested!.

This is a crisis! And, unless Republicans want to hear more feedback like the bit La Shawn Barber gave the president –PunditGuy says Don’t Go There!- and the party yesterday, they need to do something about this crime.

I am sure it helps that good Americans, like Tom Kubiak, are writing senators and representatives with letters like this one:

By Article 1, Section 8 of the Constitution of the United States, it is Congress and Congress alone that has to straighten out the Naturalization Rules regarding Immigration and all of the procedures in order to apply for Naturalization. It would seem to me that the will of the people is fairly obvious, illegal marchers not withstanding. Yet all I see is vacillation, procrastination, and subterfuge. No one seems willing to actually do something, anything—other than spend our money of course.

We have had immigration problems for years. Indeed, we have also had energy problems that can be traced back to the 1973 oil embargo (France is 75% nuclear powered, for goodness sake!). We have had numerous ethical lapses in Congress, as well as pork barrel issues, welfare problems, a terrible and complicated tax system and a Social Security system that is slowly but surely sinking into a peat bog, for years. What we don’t seem to have is any accountability. When Senator Specter starts dancing the two step around what the meaning of “amnesty” is, we have a “failure to communicate” but accountability is no where to be seen

I do not believe that every young man or woman that goes to Washington is a low down, mean spirited sidewinder, but somehow, in short order, they all seem to become that. They lose sight of who they were and what they were sent to do; Representative Spence perhaps being the lone exception that I can see. I do not see where there is much movement. I do not see where there is much movement caused by letter writing to our senators and representatives, although I am willing to do so and am. It appears that only the Mighty Media have the politicians’ ear.

(So in that vein, I seek your aid in getting the movement for accountability in Congress going. You are an influential member of said Mighty Media, with you position as commentator on ####### and your efforts for the ##########.)

We need you to start the push for simple accountability from Congress. When Senator Durbin sits with Tim Russert and makes a whole collection of adle-pated comments about “the environment while discussing Anwar and $3.00 gasoline, someone needs to grab him by the stacking swivel and burst his bubble. We are not Cheez Whiz; we are the sovereign citizens of this nation, and we are not happy! It is time they stop trying to simply smear President Bush and get on with the job for which they were elected, the business of this nation.

Thank you and your staff for, at least, reading my letter. I am just a lone voice in Middle America—neither a Republican nor a Democrat—but a Patriot wanting our Congress to refocus and move this country forward in a positive manner. I believe I am speaking for the silent majority of this country.

I am just trying to light a fire and call for some accountability. I almost barfed this morning reading on Freepers that Lou Dobbs is getting market share on his stance on Immigration. Bet he doesn’t carve to the core of the problem. Don’t know because I wouldn’t watch CNN if my life depended on it.

Thanks for listening to the ranting of an old man. I’ve got a fire in my belly and I need to vent. TK

Well put! We will see what happens on Monday.