** This post contains an audio testimony from one of the “captive audience” members from last week’s Commencement Speech at the University of Missouri St. Louis by Liberal Democratic Representative William “Lacy” Clay (D-MO).

His speech was not just bad. He nearly started a riot and needed security to leave the building!

And, it wasn’t just Democrat John Murtha who had disgruntled seniors walk out on him! 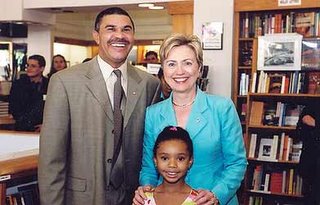 Rep. William “Lacy” Clay (D-MO) was all smiles when Hillary made it to town for a New York Senatorial fundraiser(?) but he wasn’t smiling when he had to flee the building after his Bush-bashing Commencement Speech at UMSL on May 13, 2006.

Representative Lacy Clay Jr. gave such a hate-filled speech last Saturday morning at the University of Missouri St. Louis campus that he had to stop three times during his talk because the boos from the crowd had drowned him out! But unlike Murtha, Lacy Clay needed security to escort him from the building after he was through with his Bush-bash!

Here is one account by Matt Keller emailed to the Jamie Allman in St. Louis last week:

He spent a good five minutes talking about how President Bush lied, there were no weapons of mass destruction, we need to bring our troops home, etc. (the typical rhetoric of the left). He even gave the number of U.S. casualties to date. During this tirade many people began to boo and yell. At one point the jeers were so bad that Mr. Clay said “Now wait a minute, I have the microphone so you need to listen”

And, here is the audio of what one caller said on the Allman and Smash in the Morning Show at 97.1 last week (as provided by 97.1 FM):

Ben Phillips from St. Louis wrote in with this after the speech:

Jim, just heard a story about Bill Clay at last weekends graduation when he attempted to interject anti-war politics into his commencement address. The crowd erupted into boohs and jeers of get off the stage. Apparently it was quite a scene. At the end 20 or 30 of 600-800 in attendance stood up and applaused.

“… am waiting and waiting to hear the local news report that US Congressman William L. Clay was nearly booed off the commencement ceremony stage Saturday morning at the University of Missouri-St. Louis. Clay departed from typical commencement speaker fodder to criticize the war in Iraq and President Bush. The crowd in attendance did not take it lightly or quietly.”

I have much more in an earlier posting:
Graduation Outrage! Rep. Lacy Clay Needs Police After Bush-Bash!

** I hope you liked the audio. It is my first attempt at audioblogging!

Glenn Reynolds talks more on the “self-implosion” of the Democratic Party today:

Seems to illustrate the point made in this WSJ editorial about the Democrats’ penchant for self-marginalization and self-destruction: “We doubt all of this will help Democrats with the larger electorate, which whatever its doubts about Iraq does not want a precipitous surrender. Americans haven’t trusted a liberal Democrat with the White House during wartime since Vietnam, which is when the seeds of the current antiwar rage were planted. The great mistake that leading Democrats and anti-Communist liberals made during Vietnam was not speaking up against a left that was demanding retreat and sneering at our war heroes. Will any Democrat speak up now?”