As usual, Chavez calls Bush a terrorist, promises cheap oil and is flocked by Leftists during his stay in London,
VIDEO CLIP HERE 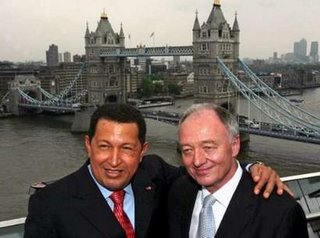 Venezuela’s President Hugo Chavez (L) and London Mayor Ken Livingstone pose for a picture in front of the Tower Bridge in London during Chavez’s private visit May 15, 2006. Chavez reiterated his support for Iran on Monday in its stand-off with the West over nuclear technology, saying a U.S. military strike against Tehran would be madness. (REUTERS/Miraflores)

Hugo Chavez turned on London Mayor “Red” Ken Livingstone with his disturbing tirade on Monday at a press conference in London:

The leftist leader made his remarks on Monday at a joint news conference with London Mayor Ken Livingstone after a reporter for the BBC likened some comments of his to Bush’s phrase, first delivered shortly after the September 11 terrorist attacks, “You are either with us or against us in the fight against terror.”

At that, Chavez erupted in anger about being “compared to the biggest genocide person alive, in the history of humanity, the president of the United States — killer, genocidal, immoral — who should be taken to prison by an international court. I don’t know to what you are referring when you compare me to President Bush.”

He added: “Have I invaded any country? Have Venezuelans invaded anything? Have we bombarded a city? Have we had a coup d’etat? Have we used the CIA to kill a president? Have we protected terrorists in Venezuela? That’s Bush!”

No wonder Jimmy Carter likes him so much!

Speaking on the “Wipe Israel off the map” folks in Iran, Chavez added:

He said he is sure that the Iranians are not working on a nuclear weapon, as U.S. officials have claimed. “The Iranians, like us, want peace,” he said.

You’d think that some bright reporter might ask how “Wiping Israel from the map” fits in a peace plan!

Mr Livingstone described the president as “the best news out of Latin America in many years.”

Meanwhile, the former mistress of Hugo Chavez was not kind in her remarks of the Venezuelan President in this London interview:

“He is imposing a fascist dictatorship,” Marksman said. “A totalitarian regime is coming because he doesn’t believe in democratic institutions.”

But not all was calm in London. Aleksander Boyd, at VCrisis explains how the anti-Chavez forces were not allowed access to City Hall after being banned by London Mayor Ken Livingstone. However, Aleksander was interviewed by the BBC and had a busy day that included another debate with Chavez apologist John Rees from George Galloway’s Respect’s party in a London radio show.