John Murtha, if you quit beating down the US troops long enough, you might notice that a real cold blooded killer was arrested in Iraq on Monday. 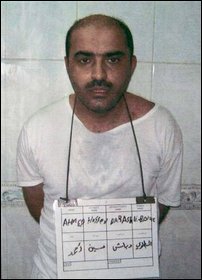 My Lord, what kind of an animal performs “hundreds of beheadings!”

Ahmed Hussein Dabash al-Batawi, one of the most wanted terrorists in Iraq, was arrested in Baghdad on Monday:

Under interrogation, Mr Batawi allegedly confessed to beheading hundreds of Iraqis, the prime minister’s office said in a statement.

The US military said he was also responsible for several major bomb attacks on Shia shrines in 2004.

“Sheikh Ahmed al-Dabash was a major financier and facilitator of terrorism in Iraq, most notably the bomb attack in the Shiite holy city of Karbala on 2 March 2004,” a statement quoted by Reuters news agency said.

The special unit found documents in Alabatawi’s possession, which had lists of, targets in Naynawa he was going to hit. They also found a number of mobile phones and a computer, all containing important and vital information about the names and whereabouts of other terrorist suspects along with expiationist announcements and memos.

Iraqi police in Wasit announced yesterday that three of Zarqawi’s noted assistants were killed in Sobehrah because of an armed confrontation with Iraqi swat police. The men killed were amongst Zarqawi’s important assistants and leading members of Alqaida in Iraq’s Wasit province. Sobehrah area in western Wasit is considered a high terror activity area, which sees regular armed confrontations with terrorists.

In Babylon, police Scorpion units arrested yesterday 14-armed men in the Siafiah area and uncovered a large weapons cache. The Scorpion unit raided Arab Jiboor via air and parachuted police into the area after they received intelligence that a number of armed men were in the area. They added that a two hour armed confrontation took place, which resulted in two wounded police. The cache found was of weapons, ammunition, bomb making equipment and remote detonators.

While most of our news focuses on the tragic bombings of innocent Iraqis, police and government buildings, they do not report on all the security forces successes in thwarting attacks, arresting terrorist and uncovering weapons and bomb making equipment. It is very easy to focus on the tragedy and telling the tragic stories. But why not also tell the story of the successes we and the Iraqis are having in Iraq. Our training of the Iraqi security is yielding good results against the terrorists and intelligence is coming in to Iraqi security on a regular basis. The main reason the terrorist are stepping up their campaign is to shake the new government and also because the Iraqis and us are getting closer and closer to squeezing the terrorist into their last stand in central and western Iraq.

Haider sure has a positive and hopeful outlook on the future Iraq. It is a very sad situation we have when US marines can be accused of “cold blooded murder” before their trial is complete. Yet, a real cold blooded devil is arrested and it goes mostly unnoticed.