After police tried to break up the immigrant protest Monday night, they were showered with rocks and bottles,
REUTERS VIDEO HERE

There is not much mention about this violent finish to the immigrant protests in any of the press reports today… if any!

The LA Times lead with:

They seemed to have missed that kerfuffle in their reports on the protest this morning.

Let’s face it. The protests were all about amnesty for illegal aliens. 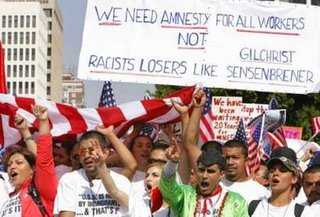 Thousands of demonstrators march along Wilshire Boulevard in downtown Los Angeles May 1, 2006, as part of what is being billed as ‘A Day Without Immigrants,’ a nationwide protest staged by immigrant rights advocates to protest proposed legislation to reform U.S. immigration law. (REUTERS/Lucas Jackson)

Monday’s protests resembled the March 25 demonstration in many ways, but seemed more energetic and boisterous. “Today we feel victorious,” Alejandra Arcasi, a 40-year-old naturalized citizen from Peru, said as she marched toward City Hall. “But there is still a lot more to do.” 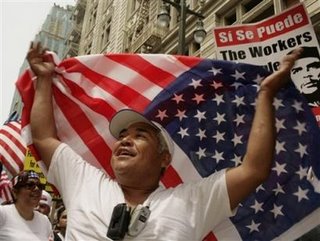 A demonstrator takes part in an immigration protest in downtown Los Angeles, Monday, May 1, 2006. Marching in waves of red, white and blue, chanting ‘USA, USA’ and singing the national anthem in English, illegal immigrants and supporters rallied by the thousands as part of a nationwide work and shopping boycott designed to demonstrate economic power. (AP Photo/Oscar Hidalgo)

South of the US border, the roads were blocked during demonstrations for a “Day Without the Gringo”. There was also vandalism reported on at least one US owned bank.

Michelle Malkin has the pictures that you won’t see splashed on the front pages this morning.
Pajamas Media has a great roundup of the protests on Monday. More Here and Here.
California Conservative has Rep. Boenher’s (R-OH) smackdown of Minority Leader Pelosi and her democratic colleagues.