For the first time ever, federal officials seized grenades, pipe bombs and material to make improvised explosive devices (IED’s) in February this year in Laredo, Texas during border raids.

California Conservative has links to a disturbing news report on Terrorists Entering the US via the Border. 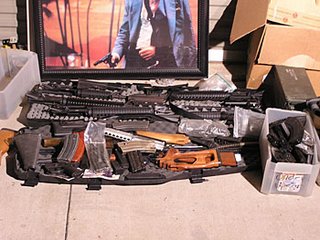 This is disturbing news from earlier this year about the weapons caches that border officials are seizing from border raids:

In a raid on a home in Laredo on Jan. 27, and another in Laredo on Thursday, agents found stacks of fully automatic rifles, military-style grenades, pipe bombs, gunpowder, drugs and homemade bombs similar to the IEDs used in Iraq. Some of the bombs were loaded with BBs and ball bearings.

Don Carter, special agent-in-charge of the Bureau of Alcohol, Tobacco and Firearms in Houston, said the investigation of who made the bombs and for what purpose is just getting started. He noted, however, that discovery of the improvised explosive devices marks a significant change in the picture of drug violence along the border.

The government received warnings of possible Al Qaeda ties to drug and human smugglers working on the border:

The announcement Friday (back in February) comes on the same day that the Val Verde County chief deputy warned federal lawmakers meeting in Houston that drug traffickers are helping terrorists with possible al-Qaeda ties cross the Texas-Mexico border into the United States. An FBI spokeswoman in Houston could not immediately confirm his account.

Terry Simons, chief deputy in Val Verde County, is part of a group that has been pushing state and federal officials for more law enforcement funding on the border. And he mentioned the threat in a presentation to U.S. Reps. John Culberson, R-Houston, and James Sensenbrenner, R-Wis.

Ms. Myers’ announcement also follows a week in which Mexican and U.S. officials have challenged each other over so-called Mexican military incursions into the United States at the border near El Paso. Officials in Mexico announced Friday that they had identified the men responsible, although they are not in custody.

This certainly isn’t the first time we’ve heard about terrorists coming into the country illegally through our southern border.

Congressman Jack Kingston in an interview at Right Wing News shares his thoughts on the Senate proposals on border security and immigration today.