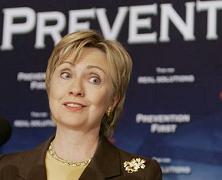 U.S. Sen. Hillary Clinton discusses the negative impact of the Bush/Enzi health bill and women’s access to contraception and abortion prevention efforts while at a news conference in the U.S. Capitol in Washington, May 10, 2006. (REUTERS/Larry Downing)

In a speech to the US Chamber of Commerce last week, Hillary challenged the lazy kids in today’s America:

On Thursday Sen. Clinton spoke ay the annual U.S. Chamber of Commerce convention, where she criticized young whippersnappers for not wanting to work hard and for expecting everything to be handed to them on a silver platter.

Said Hill: “Kids, for whatever reason, think they’re entitled to go right to the top with $50,000 or $75,000 jobs when they have not done anything to earn their way up…A lot of kids don’t know what work is. They think work is a four-letter word.” (This may be true, but hey, at least these kids know how to put a condom over a cucumber, thanks to elected officials like Hillary).

She also complained that “[w]e’ve got to send a different message to our young people. America didn’t happen by accident. A lot of people worked really hard. They’ve got to do their part, too.”

Mrs. Clinton did not bother mentioning how her daughter Chelsea managed to snag a choice, six-figure consulting gig with a high-priced firm immediately after graduating from Oxford in 2003. Unfortunately, not every kid’s parents are President and U.S. Senator. Hillary blamed cable TV, the Internet, cellphones and iPods for instilling a culture that “really argues against hard work. It’s a culture that has a premium on instant gratification.”

On Sunday Hillary said that kids weren’t that lazy afterall.