** The death toll of Hindus killed by militant Islamists in Kashmir has risen from 22 to 35 in the last hour! **

The victims were taken from their homes before being lined up and shot. A survivor tells about his horrid experience,
BBC VIDEO HERE.

“In southern Kashmir, Hindu villagers were herded into the home of the village chief where gunmen started firing indiscriminately, according to S.P. Vaid, inspector-general of police in Jammu.” – CNN 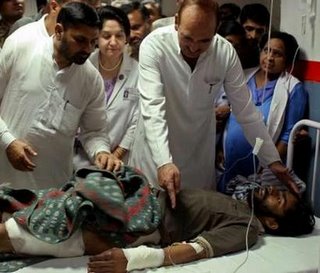 Militant Islamists went on a gruesome killing spree today in Kashmir aimed at wrecking the talks between moderate Muslims and the Indian government:

Suspected Islamic militants have killed at least 35 Hindus in two separate attacks in Indian-controlled Kashmir, police say. Twenty-two people were shot dead after being taken from their homes in mountainous Doda district, police say. The death toll in an earlier attack in neighbouring Udhampur district has risen to 13, officials say.

No group has said it carried out the attacks, the worst since a ceasefire between India and Pakistan in 2003.

More than 60,000 people have been killed since an armed separatist insurgency began in Kashmir in 1989. 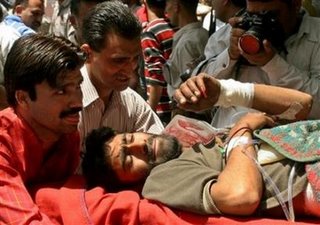 An injured man is taken to a hospital in the northern Indian city of Jammu May 1, 2006. Suspected Islamic militants shot dead at least 22 Hindus in two small villages in Indian-administered Kashmir on Monday, officials said. (Amit Gupta/Reuters)

The slaughter precedes a scheduled meeting between Indian Prime Minister Singh and Kashmiri separatists on Wednesday. The dead were Hindu cattle herdsmen.

The Times of India describes the gruesome scene in the Doda district of Kahmir:

“The militants first went to the house of revenue official Gopi Chand and told him to round up the Hindus and bring them to his house,” Rajinder Kumar Sharma, said.

“They blamed us for the death of one of their comrades last year. They took Chand to one of the rooms and shot him dead… They then bolted the door and two of them opened indiscriminate fire,” Sharma said.

Another survivor, Vilayat Singh, said “a chowkidar (watchman) of the village Sadhu Ram called us out from our houses and took us to the house of Jagdish Bhagat in another locality of the village”.

Singh did not sustain any bullet injuries but was beaten by gun butts. He said the militants “took our identity cards and asked us to line up in a circle inside Bhagat’s house”.

Also, earlier today an IED hidden at a worksite exploded and killed one as laborers started work this morning in Kulangam village in north Kashmir’s Kupwara district.

Jim Hoft
Jim Hoft is the founder and editor of The Gateway Pundit, one of the top conservative news outlets in America. Jim was awarded the Reed Irvine Accuracy in Media Award in 2013 and is the proud recipient of the Breitbart Award for Excellence in Online Journalism from the Americans for Prosperity Foundation in May 2016.
BREAKING: Burisma Investigation to be Released within 24 Hours -- FINDS BIDEN FAMILY GUILTY LIKELY CRIMINAL ACTIONS (VIDEO)
Let's Make Her Famous! Violent, Foul-Mouthed Leftist Caught on Video Ripping Down Trump Sign in Castle Rock, Colorado
Karma's a Bitch -- Angry Woman Driver Screaming at Trump Supporters and Flipping the Bird Rear-Ends Car in Front of Police (VIDEO)
Obamagate the Movie Is Being Censored by Twitter -- China-Like Censorship in US During an Election -- Where Is the GOP?
Tim Tebow and His Wife Demi-Leigh Join Bill Barr and Ivanka Trump to Battle Scourge of Human Trafficking
See more...