Sometimes, it’s not all about you. 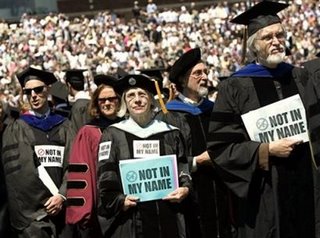 Dr. John wrote this about his experience yesterday at the Boston College Commencement ceremonies:

I was there for my son’s graduation.

Rice received at least 5 standing ovations. She was terrific. Less than 100 students wore armbands and 2100 did not.

The behavior of the faculty was reprehensible. As parents of this class we paid $66 million in tuition this year. This was a day for our children and for us. It was not a day for those sniveling whiny teachers to have to let everyone know of their political bents. As is typical of liberals, their contempt took priority over our celebration. These same cretins would likely have embraced Ward Churchill or the Yale Taliban.

There is nothing lower than a liberal academic. They hold our kids hostage. They attempt to infect the kids with their brainwashing and the kids cannot fight back else they suffer academically. These faculty members won’t come out and engage anyone on a level intellectual playing field because they cannot hope to win an argument in such an arena.

That AP story suggests that Iraq being the right thing to do came up during the speech.

The parents and students overwhelmingly were thrilled to have Condi speak.

Not that you’d know it.

Congratulations to you, Dr. John and your son!
Thankfully, it sounds like he does not need to look to faculty members for guidance.

Update: Dr. John is right about the AP.

No, the promise of human progress is always carried forward by men and women who serve a cause greater than themselves. I know how hard it can be these days, when we see images of genocide in Darfur or violence in Iraq or destruction along our own Gulf coast, to believe that such a thing of human progress is possible is sometimes difficult.

The AP quotes Rice as saying:

Rice said the use of force in Iraq was “the right thing.”

It is unclear where they got this line. It may have come from her interview the day before but clearly it did not come from her commencement speech… which is very good by the way.

I am unsure why the AP would stick that line in this article and how it fits with their anti-War agenda. It is either sloppy writing or biased writing. I am not sure which.

— The State Department also has the video of the speech up. No hecklers. Condi rocks!