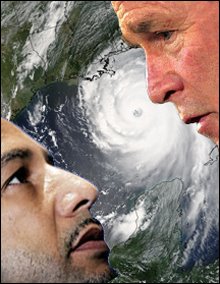 Via Polimon…
Self-implosion cannot be too far off for the Democratic Party.

Just as we were all getting used to George Bush being the reincarnation of Adolf Hitler, the Left switches gears and makes George Bush an “ethnic cleanser” from South Africa.

After all, the levees were blown up, you know.

It’s true that corruption is something of a spectator sport in Louisiana and New Orleans. But whether New Orleans before Hurricane Katrina was any more corrupt than the Washington of the self-confessed criminal lobbyist Jack Abramoff and his close ally, the indicted former Republican House leader Tom DeLay, remains for historians decide. In the meantime, Bush sits in the White House very much in charge and very much at large.

Not, that this would change anyone’s mind, but here are a list of facts around the whole racism and Katrina deal.